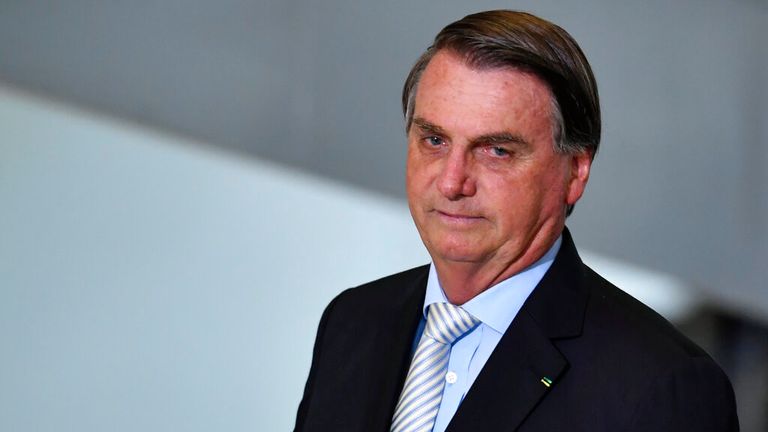 Brazil's leaders say they will need billions of dollars in foreign aid each year if the country is to reach net zero carbon emissions by 2050.

Environment minister Ricardo Salles said $10bn (£7.2bn) is needed every year to reach the goal a decade earlier than the current target of 2060.

He told Reuters news agency that a tenth of this amount would enable Brazil to reach zero illegal deforestation, while a third of the money would pay for tougher environmental enforcement.

The rest would be used for the sustainable development of the Amazon region.

On the proposal to stop deforestation, Mr Salles said: "This is what we presented.

"In what spirit? You want a plan? Here is a plan."

Mr Salles has previously called for the world to pick up part of the cost of reducing Brazil's carbon emissions, which are mainly from deforestation.

More from A New Climate

His call for foreign aid comes as Brazil tries to negotiate a deal with the US for funding to stop the devastating practice in the Amazon rainforest.

But these talks have reportedly reached an impasse as Brazil wants funding upfront to fight deforestation and the US wants results before it hands over the money.

Mr Salles said: "We understand their logic, but they need some understanding that Brazil already has a lot of results."

He said most of Brazil's forests are preserved, meaning emissions from the carbon they contain has been avoided.

Deforestation has long been a problem in Brazil but it hit a 12-year high last year under President Jair Bolsonaro - government data shows that an area 14 times the size of New York City was destroyed.

Last week, Mr Bolsonaro wrote to US President Joe Biden promising to eliminate illegal deforestation by 2030 but he stopped short of meeting other US demands.

These include an immediate decrease in deforestation this year and tougher environmental enforcement.

Brazil's vice president Hamilton Mourao said that reaching the 2030 target would mean a 15-20% reduction in deforestation every year until then.

The military is currently trying to stop deforestation in the Amazon region but they appear to have had little success.

Mr Mourao said that, if progress is not made by July, the deployment could be extended, despite the expense.