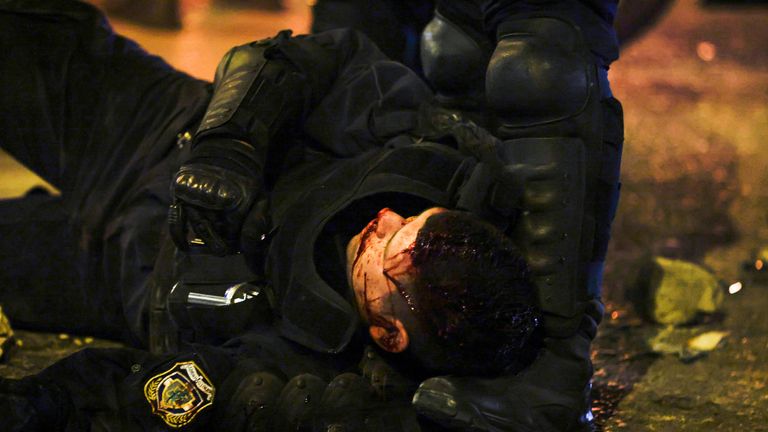 A Greek officer has been seriously injured after clashes broke out during a demonstration over claims of police brutality.

The protests were sparked by a video appearing to show a man being beaten by officers in a suburb of Athens on Sunday.

More than 5,000 people marched through the densely populated residential area of Nea Smyrni on Tuesday.

Some banners read: "Cops out of our neighbourhoods."

Police later fired tear gas to disperse groups of masked protesters who broke away from the march and hurled petrol bombs, rocks and other objects at them.

During the clashes, witnesses reported seeing a group of protesters attacking one officer, leaving him lying on the ground suffering from head injuries.

As the clashes continued through the evening, at least three officers were hurt and police made 10 arrests.

The incident shown in the amateur video has been condemned by opposition parties.

An ombudsman looking into the case said this week that complaints of police brutality in Greece had been on the increase, as frustration grows with the restrictions brought in during the coronavirus pandemic.

Referring to the injured policeman, he called for restraint, and added: "I am addressing young people, who are destined to create and not to destroy. Blind rage does not lead anywhere."