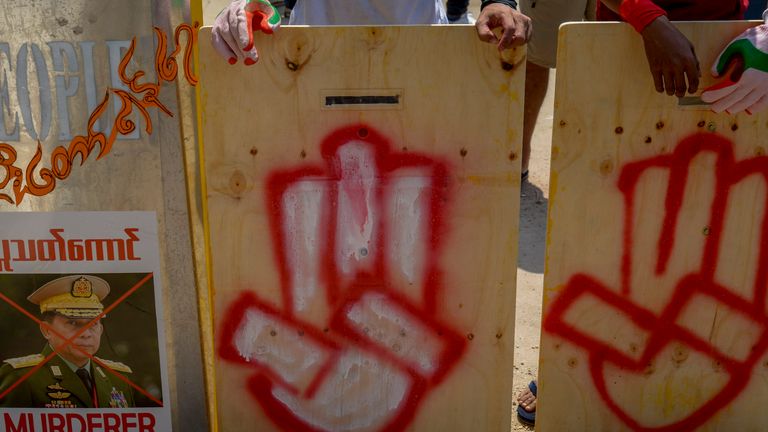 Myanmar has recalled its ambassador in Britain after he called for the release of Aung San Suu Kyi, the civilian leader detained when the country's military seized power last month.

Kyaw Swar Min had released the statement on his own accord, state-run TV news channel MRTV said.

"Since he did not conduct himself in accordance with given responsibilities, an order [is issued] to summon and transfer him back to the Ministry of Foreign Affairs," it said.

Ms Suu Kyi was held, along with most of her cabinet, after army generals staged a coup on 1 February.

"We request the release of State Counsellor Daw Aung San Suu Kyi and President U Win Myint," it read, echoing the UK government's own repeated calls for those held since last month's military takeover to be freed.

His recall comes as around 1,000 demonstrators took to the streets of Mandalay, the country's second biggest city, on Tuesday, to protest against the coup.

Those at the front carried homemade shields bearing images of the three-fingered salute, the movement's symbol of defiance.

Demonstrators gathered for just a few minutes before dispersing to avoid a possible confrontation with security forces, who have used live rounds to break up crowds.

Another group made a mobile protest, driving through the streets on motorbikes while protests took place in other cities and towns across the country, local news reports and social media said.

The government's crackdown has left more than 50 demonstrators dead but has failed to slow the widespread protests.

More than 1,850 people have been arrested, Myanmar-based Assistance Association for Political Prisoners, has said, while dozens of journalists have also been detained.

Meanwhile, an official from Aung San Suu Kyi's National League for Democracy (NLD) has died in custody after he was arrested early on Tuesday.

Zaw Myat Linn is the second party figure to die in detention in two days after being arrested in Yangon around 1.30am, said Ba Myo Thein, a member of the dissolved upper house of parliament.

The cause of death was not clear and neither the military nor the police responded to calls for comment.

Security forces have also cracked down on independent media, raiding the offices of two news outlets and detaining two journalists.