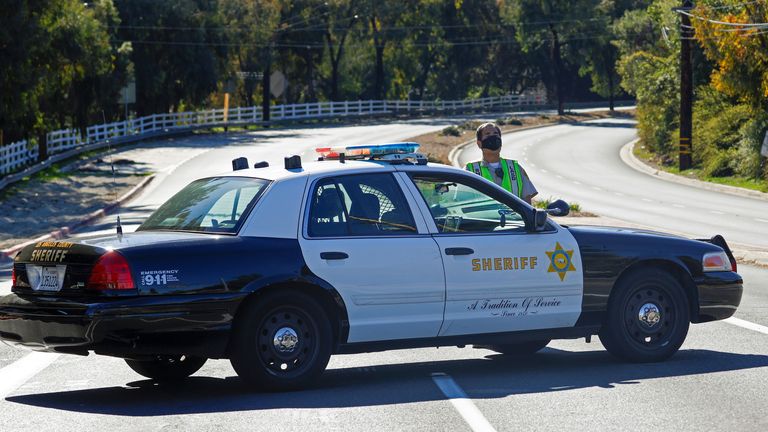 Authorities investigating a serious car crash that has left Tiger Woods with serious leg injuries say there is no evidence he was impaired at the time.

The legendary golfer is currently undergoing surgery for injuries to both legs after being pried from his car following an accident in Los Angeles.

The crash happened on the border of Rolling Hills Estates and Rancho Palos Verdes on Tuesday morning.

LA County Sheriff's Department said Woods was the only person in the car, and the sheriff's office later confirmed his injuries are not life-threatening.

The sportsman sustained "serious injuries to both legs" during the crash, according to Los Angeles County Fire Department chief Daryl Osby.

Woods has been taken to Harbor UCLA Medical Center, where authorities said he is in a "serious" condition but refused to comment further.

Speaking at a news conference, Sheriff Alex Villanueva said investigators at the scene "did not see any evidence of impairment" although there were indications the car was travelling at a "relatively greater speed than normal".

Overhead footage showed the car on its side, with its front end heavily damaged and its airbags deployed.

Despite huge damage to the 2021 Genesis SUV, the interior remained "remained more or less intact, giving [Woods] the cushion to survive what would have otherwise been a fatal crash", Mr Villanueva said.

It was found 700ft from the central divider at the intersection, having hit a curb and then a tree before rolling several times, the sheriff added.

Woods was "alert and talking" when first responders arrived at the scene, according to NBC News correspondent Jennifer Bjorklund.

Earlier reports suggested jaws of life were used to extricate Woods from the car, but Mr Osby clarified other equipment including an axe had been used to pry the golfer free through the vehicle's windscreen.

An investigation into the crash is likely to take "several weeks", Mr Villanueva said, adding that there are frequent accidents on the stretch of road, which has a "downward slope".

Woods' agent Mark Steinberg told Golf Digest in a statement: "Tiger Woods was in a single-car accident this morning in California where he suffered multiple leg injuries.

"He is currently in surgery and we thank you for your privacy and support."

He was due to be hosting a second day of celebrity lessons on Tuesday.

Speaking at a press conference ahead of the WGC-Workday Championship, world number three Justin Thomas said: "I'm sick to my stomach.

"You know, it hurts to see one of your... now one of my closest friends get in an accident. Man, I just hope he's all right. Just worry for his kids, you know. I'm sure they're struggling."

Jack Nicklaus, whose record of 18 major titles has been one of Woods' biggest goals, wrote on Twitter: "Barbara and I just heard about Tiger's accident, and like everyone else, we are deeply concerned.

"We want to offer him our heartfelt support and prayers at this difficult time."

"We know how tough you are, we've seen it a hundred times. Hoping and praying you're ok my friend."

The PGA Tour said in a statement: "On behalf of the PGA Tour and our players, Tiger is in our prayers and will have our full support as he recovers."

Woods has not played since December, when he took part in the PNC Championship in Orlando with his son, Charlie, who turned 12 earlier this month.

On 23 December he had his fifth back surgery and said last weekend that he was unsure whether he would be able to play in the Masters Tournament in April.