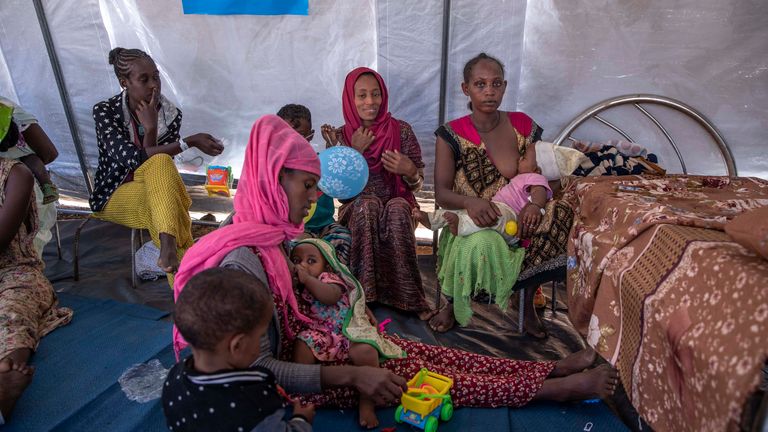 G7 leaders need to provide clarity on when they will start sharing COVID-19 vaccines with poorer countries and how many, Unicef has told Sky News.

Boris Johnson confirmed ahead of a virtual meeting of G7 leaders on Friday the UK will share the majority of its surplus COVID-19 vaccines with COVAX, the international programme aimed at ensuring global vaccine equity.

The prime minister has urged his fellow leaders to do the same, while French PM Emmanuel Macron said Europe and the US should allocate up to 5% of their current supplies to the poorest countries "very fast".

Foreign Office minister James Cleverly said it was "difficult to say with any kind of certainty" when the UK could start sharing vaccines, as its own rollout steams ahead.

But Liam Sollis, head of policy at Unicef UK, called for G7 leaders and other wealthy countries to clarify when they can start sharing vaccines "with as much speed and immediacy as possible".

Unicef is responsible for distributing COVID-19 vaccines acquired through COVAX to lower and middle-income countries and Mr Sollis said it was ready to administer any shared jabs straight away.

"The immediate sharing of doses is what we need. The mechanisms are in place to distribute vaccines shared by other nations," Mr Sollis told Sky News.

"This has been a year in the making since COVAX was formed, the infrastructure is there, agreements on transport and logistics are there but the main piece of the puzzle that's missing is access to the vaccines.

"Right now, in 130 countries no doses have been administered - there's huge inequity.

"Developing countries shouldn't have to wait until everyone in wealthy countries is vaccinated."

Mr Sollis said the UK has "been on the front foot of the agenda internationally", donating the most amount of money to COVAX and promoting the equitable distribution of vaccines.

"But commitment is just a principle and the devil is in the detail," he added.

He called on the G7 and other wealthy countries to agree on how many doses they will share and when, adding that a fixed percentage suggested by Mr Macron would be difficult to work with as countries have bought different amounts of vaccines compared with their populations.

As well as dose sharing being integral to equitable vaccine access, Mr Sollis said long-term financing was needed as well.

"We're not going to vaccinate the whole world by the end of this year so we need long-term sustainable financing, and it's the world's leading economies who need to step up to that plate," he said.

"The UK, the US and others have gone a long way to that but it's going to take a long time to vaccinate the whole world.

"I don't think the global community has reacted to that financing need just yet."