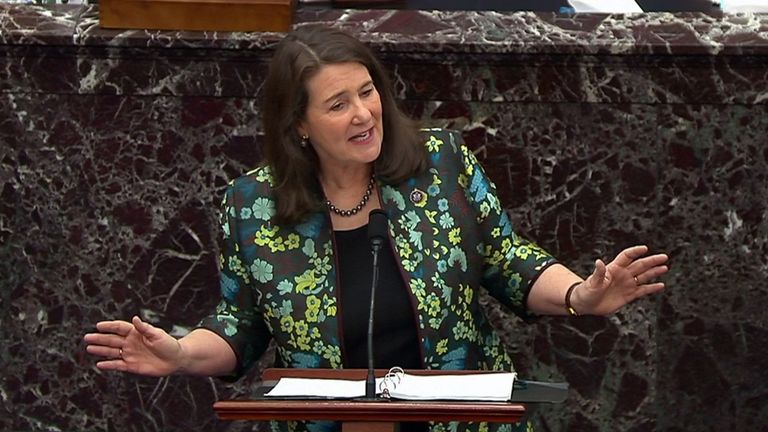 One of Donald Trump’s lawyers has denounced the impeachment case Democrats are building against him as “offensive”.

David Schoen dismissed Mr Trump's opponents who are giving evidence at the trial, as merely "making a movie" and said they had yet to tie the 6 January siege at the US Capitol to the former president.

And he suggested the use of chilling video of the riot, shown repeatedly by House Democrats during Wednesday's arguments was impeding efforts to re-unify the country.

America's former leader is charged with "incitement of insurrection" over last month's violence when the centre of US democracy was stormed by his supporters.

Democrat politicians from the House of Representatives, serving as prosecutors, have been making the case for his conviction in the upper house - the Senate.

Day three of the impeachment trial heard those rioters went to the Capitol building because "we take orders from our president".

Diana Degette told the hearing how she was one of the "unlucky members" stuck in the House gallery on 6 January as "the mob" came in, and how she "heard gunshots and flung myself down on the floor".

And she said she was left wondering: "Who sent them here?"

She continued: "The defence argued on Tuesday that the insurrectionists were acting on their own, not incited by Donald Trump but that is not the case - they said they came here because the president instructed them to do so.

"He invited them with clear instructions for a specific time and place - and with clear orders: 'Fight to stop the certification (of the election result) in Congress by any means necessary'."

She said in their own statements "before, during and after the attack" on the Capitol building they "made it clear it was done for Donald Trump, at his instructions and to fulfil his wishes.... that they were following orders from 'our commander in chief'".

She added: "Donald Trump had sent them there. They were saying 'our president wants us here - we wait and we take orders from our president'."

Ms Degette said extremist groups were "emboldened" because Mr Trump told them repeatedly that the insurrection activities were the "pinnacle of patriotism".

And she appealed to the hearing: "Let today be the day we reclaim patriotism.

"This was not the first time President Trump incited violence but it must be the last time he is given a platform - this must be our wake-up call. We must condemn it."

He said their injuries included concussions, brain damage, cracked ribs, smashed spinal discs, repeated beatings with "bats, poles and clubs," one had lost the tip of a finger and one lost an eye.

And he pointed out the attack had happened during the COVID-19 pandemic, saying seven House members tested positive after "hiding for our lives in cramped quarters for long periods of time," at least 38 Capitol police officers tested positive or were exposed - and nearly 200 National Guard troops also contracted the virus.

"The capitol police and National Guard came here to protect us - to serve," he said. "They deserved better than this."

For the first time in history, a US president is being tried by members of the country's upper house twice.

Such was the anger among Democrats at the storming of the Capitol building in early January, they voted to impeach Mr Trump again, after the first House vote in December 2019 (for abuse of power and obstruction of Congress) failed to convict him in the Senate a few weeks later.

He was acquitted last time by a majority of 52 votes to 48 for one charge and 53-47 for the second. Only one Republican voted against him on one of the charges.

At stake this time is not whether Mr Trump remains in office, as it was 12 months ago.

He has left the White House. But, such is the fury at his four years in power, Democrats want to make sure he is barred from running for federal office again.

Ms Degette opened Thursday's hearing by trying to establish a pattern of incitement from Mr Trump.

She showed numerous social media messages from insurrectionists that said they were acting on behalf of "my president".

In one video played to the hearing, Texas estate agent Jennifer Ryan - who was arrested in the riots - was heard to say: "Personally I don't feel shame, I thought I was following my president, doing what I was called to do.

"If it comes down to war, guess what? I'm going to be there."

Ms Degette said: "They were waiting for their orders - which they got from Trump - on January 6."

Democrats face a difficult task in securing a conviction and barring Mr Trump from ever again holding public office given his continued popularity with many Republican voters.

Mr Trump has expressed interest in again running for president in 2024.

Analysis: Is incitement a part of free speech?
By Andy Parsons in Washington

If yesterday was about the pursuit of shock and awe, today's proceedings has a different theme.

The Democrats want to demonstrate that Donald Trump has shown a pattern of deliberately inciting violence, not as a by-product of his incendiary rhetoric but as a calculated tactic.

Examples cited include telling a crowd to beat up anyone who tried to throw a tomato at him; supporting a politician who assaulted a journalist and, most famously, refusing to take sides after a protestor was rammed by a car, and killed, in Charlottesville during a demonstration against white supremacists.

The Democrats know that Mr Trump's defence will, at least partly, revolve around his first amendment right to free speech.

They are trying to establish that his actions went way beyond that - and insisting that a form of speech that incites violence it not covered by the amendment.