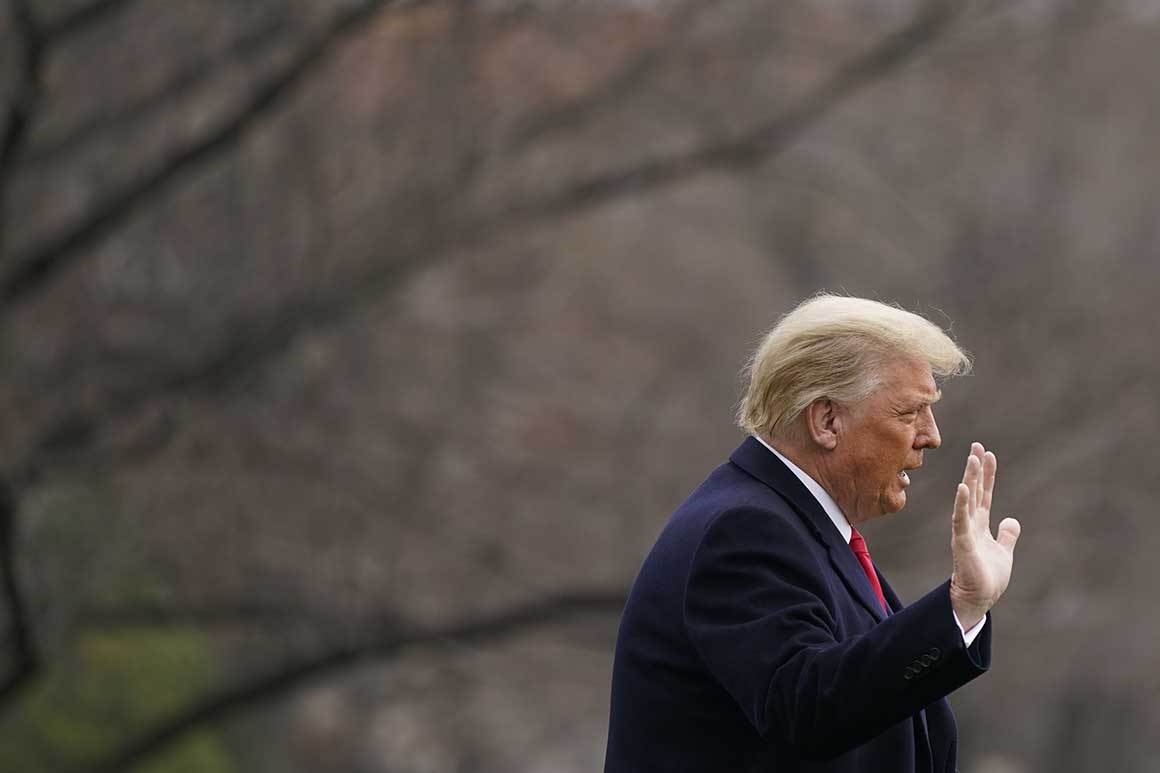 President Donald Trump walks on the South Lawn of the White House in Washington, Saturday, Dec. 12, 2020. Trump is set to leave for his South Florida Mar-a-Lago resort on Wednesday, where he plans to stay through the new year. | AP Photo/Patrick Semansky

President Donald Trump has once again thrown Washington into chaos, making uneven demands that have left lawmakers baffled and Americans coping with a global pandemic uncertain when they’ll be getting long-promised financial help.

On Tuesday night, Trump blindsided all of Washington — including his own staff — with a series of eleventh-hour demands to amend coronavirus relief and government funding legislation that his own administration had helped carefully craft and supported. Overnight and into Wednesday, senior Republicans, Hill aides and even White House officials scrambled to figure out what Trump actually wanted, just as lawmakers — and Trump — prepare to leave town for the holidays.

There’s no clear answer, though. No one on either side of Pennsylvania Avenue appears to know what Trump’s plan is — or even if there is one. House Republicans held a brief conference call Wednesday afternoon, where they received little clarity on the situation. House Minority Leader Kevin McCarthy told Republicans he spoke to Trump, but that the president hasn’t committed to anything yet, according to two people on the call.

The White House, meanwhile, did not respond to questions about the legislation.

The whole episode has frustrated some rank-and-file Republicans, who aired their grievances during the private party call, sources said. Rep. Don Bacon of Nebraska complained Trump threw Republicans under the “bus,” while Rep. Virginia Foxx of North Carolina said they need to have members going on TV to set the record straight about the legislation.

The repercussions of inaction could be dramatic. If lawmakers and White House aides can’t convince the president to sign a funding and Covid relief package by Monday, the government will enter the fourth shutdown of Trump’s presidency. And millions of Americans had been told to expect another round of direct payments from the government shortly, while businesses across the country were expecting more financial assistance.

Yet Trump left town Wednesday afternoon without saying a word about the bill, departing for his South Florida Mar-a-Lago resort, where he plans to stay through the new year. And no one seems to know what will happen next.

House Democrats on Wednesday night held a conference call, where they laid out a plan for the next few days that includes an attempt to approve $2,000 direct stimulus checks for Americans via unanimous consent on Thursday. Democrats expect at least one Republican to reject it, which would block the effort.

They are also considering a stopgap spending bill that would fund the government until the next Congress, averting a shutdown.

The sudden limbo reflects how Trump has combatively approached his final days in office. Trump’s main goal, said those close to the president and White House, is to grab attention and send a message to his base that he’s more supportive of Americans than Congress as he plots a run for reelection in 2024. And, in some ways, the strong GOP support for the bill has given Trump little reason to publicly support it. The measure is expected to eventually become law, whether by Trump relenting, Congress overriding a veto or President-elect Joe Biden entering office.

“It sends a signal he wants to help people more,” said former House Speaker Newt Gingrich, a Trump ally, even as he added that Trump’s threat on the Covid relief and government funding bill “is not helpful,” saying he hopes the president will sign the bill after making his point.

Trump might choose that path. Two people close to the president said the president is unlikely to actually veto the bill and cause a government shutdown because he doesn’t want to delay funding for distribution of the Covid-19 vaccine, which he considers one of his biggest achievements. It wouldn't be the first time Trump has threatened to veto legislation before signing it: In 2018, Trump approved a $1.3 trillion spending bill, despite saying he was “unhappy” with it.

Yet a former Trump aide who remains close to the White House said no one should be surprised by the president’s demands, noting Trump has been calling for larger stimulus checks for Americans for months in statements and on Twitter.

“Why is everyone surprised? They didn’t meet his expectations,” the former aide said. “At the end of the day, he’s fighting for people. He’s on the side of history and the side of the American people. None of this is bad for him.”

In recent weeks, Trump has shown no qualms about trying to best position himself politically for his post-presidency, even if it means holding up legislation his own party supports and attacking one-time congressional allies, like Senate Majority Leader Mitch McConnell (R-Ky.).

Trump made a similar veto threat earlier this month for the annual defense policy bill, which also passed with wide Republican support. On Wednesday, he followed through and vetoed the bill, setting up a showdown with lawmakers.

The last-minute Covid stimulus demands from Trump — who has been preoccupied with fighting the election results, leaving Treasury Secretary Steve Mnuchin to negotiate the long-delayed rescue bill — have put Republicans in a particularly tough spot. In addition to the confusion it has caused on Capitol Hill, the move has also complicated a Republican push to win two Georgia runoff races next month that will decide the Senate majority.

At the crux of Trump’s objections appears to be the $600 direct payments the bill was set to send to many Americans.

Trump had publicly and privately said he wanted the direct payments to be higher, but he did not say he was unwilling to accept the $600 checks. In fact, he had said that he would sign the bill, which White House deputy press secretary Brian Morgenstern reiterated Tuesday to reporters.

Hours later, Trump released a five-minute video he recorded in the Diplomatic Reception Room of the White House residence, surprising many of his aides. He did not threaten to veto the bill, but he did express displeasure. Trump also complained about spending levels in the measure that he has previously approved and even requested.

"I'm asking Congress to amend this bill and increase the ridiculously low $600 to $2,000," he said. “I’m also asking Congress to immediately get rid of the wasteful and unnecessary items in this legislation or to send me a suitable bill.”

But there isn’t a huge appetite in the GOP for the $2,000 stimulus checks that Trump is now calling for.

"It's a really foolish egg-headed, left-wing, socialist idea to pass out free money to people, so I part ways with the president on giving people free money,” Sen. Rand Paul (R-Ky.), who wants Trump to veto the bill for fiscal reasons, said Wednesday on Fox News.

Meanwhile, Democrats — who have been pushing for higher checks all along — could make life even more painful for the GOP in the coming days.

“Just when you think you have seen it all, last night, the President said that he would possibly veto the bicameral agreement negotiated between Republicans and Democrats,” Speaker Nancy Pelosi said in a “Dear Colleague” letter circulated to Democrats. “If the President truly wants to join us in $2,000 payments, he should call upon [House Minority Leader Kevin] McCarthy to agree to our Unanimous Consent request.”

During Wednesday’s conference call, McCarthy made clear the effort would be rejected by the House GOP as a stunt. And last week, Sen. Ron Johnson (R-Wis.) twice stopped an effort from Sens. Josh Hawley (R-Mo.) and Bernie Sanders (I-Vt.) to provide $1,200 in stimulus checks.

A last-minute veto could also have implications in the Georgia runoffs Jan. 5. McConnell had promised Sens. Kelly Loeffler and David Perdue that the chamber would not leave for Christmas without a deal, and both senators started touting the stimulus package in their campaigns this week.

Both Jon Ossoff and Rev. Raphael Warnock, who is challenging Loeffler, say they agree with Trump’s push for higher payments and are seizing on the moment to hammer their opponents. Pressed on Trump’s demand Wednesday, Loeffler said at a campaign event that she’d “certainly look at supporting it if it repurposes wasteful spending.”

"Trump has put Loeffler and Perdue in an impossible situation repeatedly throughout the entirety of the runoff. And this is just the latest chapter of the book of humiliation he has made them characters in," said one Georgia Republican strategist. “What do they do? Do they defy the president and stand by what they had been saying or do they once again look like weak puppets with no backbone?”

While Democrats from across the political spectrum rallied around Trump’s calls for more stimulus money, they also made clear they don’t want him to veto the package, which also includes enhanced unemployment benefits, small business aid and funding for distribution of the Covid-19 vaccine. Adding to the sense of the urgency, a slew of critical pandemic-related aid programs are set to expire on Dec. 26.

Hill sources warned it’s too early to game out what Congress might do if Trump refuses to sign the sprawling bill.

If Trump does blow up the bill, Congress’ options include trying to renegotiate the aid package, passing another short-term funding patch, or letting Trump take credit for a government shutdown and clearing the aid package under the Biden administration.

They could also overturn a veto, as long as it’s not a pocket veto, which allows the president to merely stall on signing a bill while Congress adjourns.

But those are worst-case scenarios that leaders had been working feverishly to avoid. In fact, during a meeting on the relief bill with the “big four” congressional leaders, Pelosi had repeatedly pressed Mnuchin — who was patched in via speakerphone — for Trump’s position on the stimulus checks.

After four times without an answer, Pelosi said: “Come on Steven!”