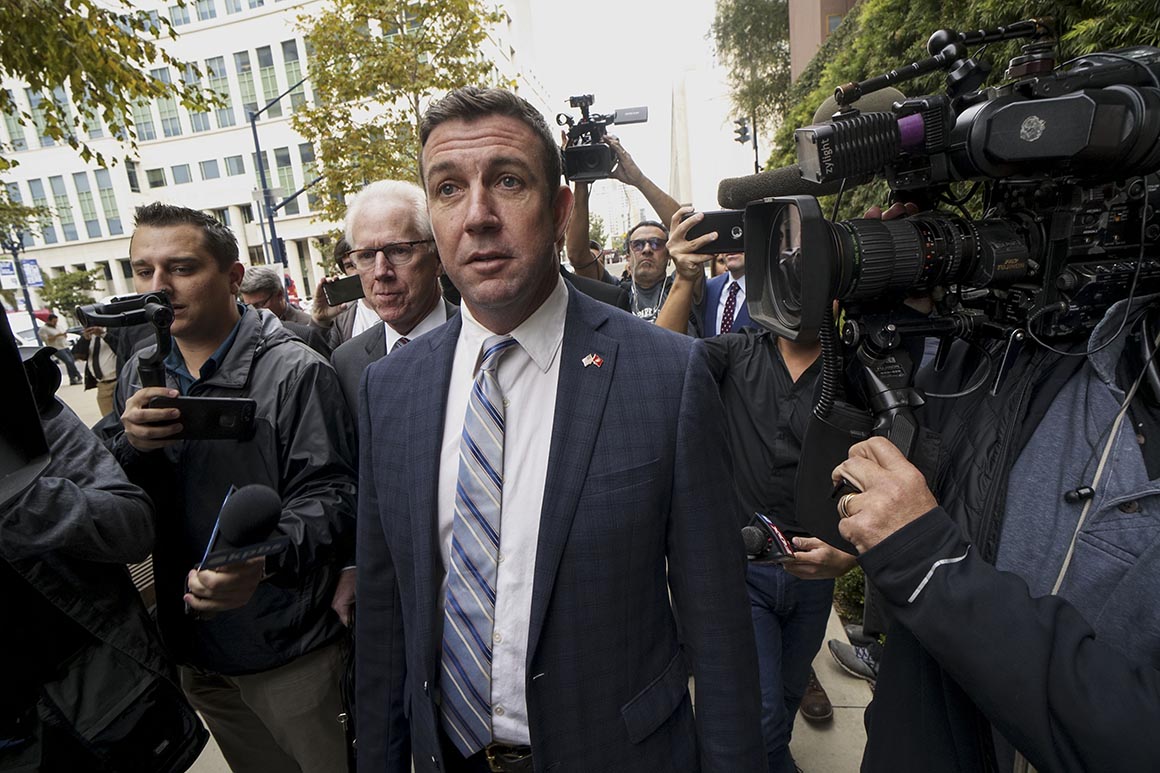 President Donald Trump issued a raft of pre-Christmas pardons and commutations Tuesday, favoring the well-connected and those with A-list advocates, while appearing to shunt aside — at least for now — more than 14,000 people who have applied for clemency through a small Justice Department office that handles such requests.

Some of Trump’s actions seemed intended to send clear messages, such as grants of clemency for the former campaign operative whose 2016 activities triggered the FBI probe that led to Special Counsel Robert Mueller’s investigation and to four security contractors convicted for massacring Iraqi civilians in 2008, including one serving a life-sentence for first-degree murder.

The signal of Trump’s disapproval of Mueller’s investigation into ties between the Trump campaign and Russia was unmistakable. His pardons for the contractors and for two Border Patrol agents also fit a pattern of Trump using his constitutional clemency power to rein in efforts to police the conduct of front-line military and security personnel. That has prompted pushback from military leaders who fear a loss of discipline among those who routinely use deadly force.

Trump also commuted the sentence of former Rep. Steve Stockman (R-Texas), who was convicted in 2018 on a variety of fraud and money laundering charges. Stockman had served two years of a 10-year sentence.

A few of Tuesday’s grants are part of a modest number of pardons and commutations Trump has offered to convicts whose cases were pursued by prominent criminal justice reform advocates. Trump’s predecessor, President Barack Obama, issued far more in those sorts of cases and actively solicited clemency applications.

Some advocates for greater use of presidential pardon and commutation powers expressed disappointment that Tuesday’s list did not include a batch of applicants who came through the Justice Department office that fields such requests.

“It looks as if the president is relying very heavily on recommendations from members of Congress and people he knows personally and not on the Justice Department pardon process that’s served presidents well for 150 years,” said Margaret Love, who served as pardon attorney under Presidents George H.W. Bush and Bill Clinton.

Love said she hopes more pardons to those without high-level connections will emerge between now and when President-elect Joe Biden is sworn on Jan. 20.

“I am optimistic there will be further grants soon that go to ordinary people that applied in the regular order through the established process and have been patiently waiting, sometimes for years,” she said.

Trump’s decision to pardon George Papadopoulos, whose early-2016 interactions with a Russia-linked professor led the FBI to launch the counterintelligence investigation into Trump’s campaign, follows a roller coaster for the young operative.

Papadopoulos initially cooperated with investigators and hinted he would play a whistleblower-type role. He pleaded guilty in 2017 to a false-statement charge and wound up serving 12 days in prison.

Later, he very publicly broke with investigators, alleging he was the target of an anti-Trump operation. He wrote a book called “Deep State Target” that turned him into a Trump-world darling.

“We are both very happy!” Papadopoulous said in a brief message to POLITICO when asked about his pardon, a reference to him and his wife Simona Mangiante Papadopoulos, who also played a brief role in the Mueller probe.

Trump had once dismissed Papadopoulos as a “low level volunteer” who had “proven to be a liar.” But Papadopoulos’ conversion into Trump acolyte changed his fortunes. Trump also pardoned a bit player in the Mueller investigation, Alex van der Zwaan, whose interactions with Trump advisers Paul Manafort and Rick Gates became of interest to investigators.

Van der Zwaan, a Skadden Arps attorney, pleaded guilty in 2018 to a felony false-statement charge. He admitted that he lied to the FBI and lawyers for Mueller’s office during questioning about his involvement with a report the firm prepared in 2012 at the request of the Ukrainian government. Van der Zwaan served a 30-day sentence in 2018 before leaving the country.

Trump’s pardons of Ignacio Ramos and Jose Compean rewards two former border patrol agents who were convicted of assault and gun crimes against an undocumented drug trafficker who was fleeing back across the southern border. Rather than report the shooting, they took steps to cover up the incident and failed to make required reports, resulting in a conviction for evidence tampering as well. The two men, whose sentences were commuted by President George W. Bush in 2009, became a cause among immigration hardliners like Fox News host Lou Dobbs, who has outsized influence in Trump’s orbit.

One set of Trump pardons released Tuesday could result in significant fallout overseas. Trump effectively wiped out the convictions of four contractors for the former Blackwater Worldwide security firm in connection with a shooting spree in Baghdad’s Nisour Square that left 17 Iraqis dead and 20 wounded.

One of the former Blackwater contractors granted a full pardon Tuesday by Trump, Nicholas Slatten, was serving a sentence of life in prison for first-degree murder. The three others, Dustin Heard, Evan Liberty and Paul Slough, were serving terms of between 12 and 15 years in prison for manslaughter.

Iraqi anger over the massacre and the perceived impunity of security contractors led the country to attempt to ban armed private contractors altogether and to demands for the four men and a colleague--collectively known as the Blackwater 5--to be returned to Iraq for trial.

President George W. Bush eventually brokered a deal that promised the contractors would face justice in the U.S. and allowed security contractors to continue operating in Iraq.

After an early legal stumble led to dismissal of the first indictment in the case, then-Vice President Biden visited Iraq in 2010, expressed “personal regret” for the killings and promised to appeal. The case was eventually reinstated but has been a complex legal wrangle.

Trump could have simply commuted the sentences of the four men, but he granted them full pardons, suggesting he viewed their convictions as unjust.

One Blackwater contractor, Jeremy Ridgeway, cooperated with prosecutors and testified against his colleagues at trial. He received a sentence of a year and a day in prison and was released in 2016. His felony convictions on manslaughter and attempted manslaughter charges remain in place, although the convictions of the men he testified against have now been effectively wiped out.