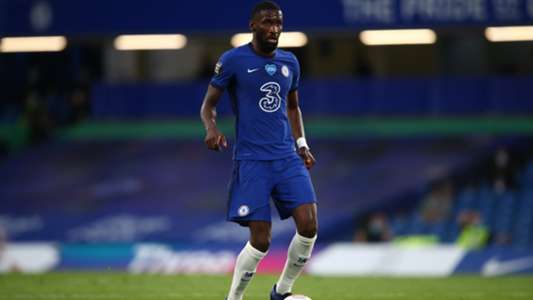 The Germany international was not included in the Blues' matchday squad, sparking rumours of an imminent move away

Frank Lampard has played down speculation linking Antonio Rudiger with a move away from the club, despite leaving the defender out of his squad for Sunday’s clash with Liverpool.

The Germany international was a notable absentee from Lampard’s 23-man squad list for Sunday’s game at Stamford Bridge, with Kurt Zouma and Andreas Christensen named in the starting XI.

Fikayo Tomori and club captain Cesar Azpilicueta were named among the substitutes, meaning there was little need for another defender to be on the bench.

With new signing Thiago Silva not yet match fit it was Rudiger who was the man to miss out, sparking speculation he could be on the brink of a transfer away from west London.

Lampard, though, was quick to dismiss those rumours, saying Rudger’s absence was simply because his rival defenders impressed more in training.

“We have five centre-halves at the club and I can't pick a squad that has three of them on the bench,” he told reporters after the game, which ended with a 2-0 defeat for the Blues.

"That is the way it is, I have to pick a squad via training and situations and that was the selection today.”

The arrival of Silva on a free transfer from Paris Saint-Germain has increased competition for a first-team place and raised suggestions Lampard could offload a centre-half before next month’s transfer deadline.

As reported by Goal last month , Everton are interested in signing Tomori on a season-long loan.

The 22-year-old had a breakthrough season at Stamford Bridge last season under Lampard, but ultimately lost his place towards the end of the campaign and he did not play in a competitive match after February.

However, Tomori and Rudiger could be offered a route back into the Chelsea side in the coming weeks thanks to Andreas Christensen’s red card against Liverpool.

Christensen was dismissed shortly before half-time for hauling down Sadio Mane as he was clean through on goal and will now serve a one-match ban.

Mane went on to score twice at the start of the second half as the  defending champions managed  to maintain their 100 per cent start to the season.