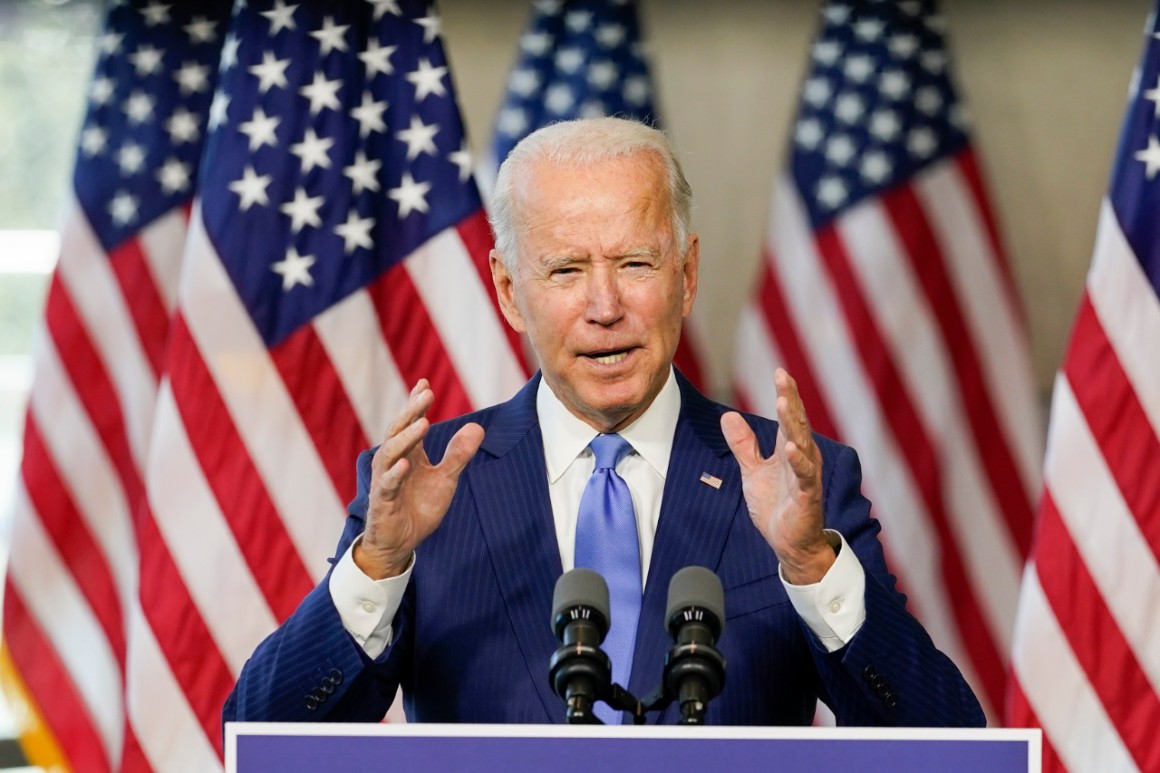 Joe Biden personally appealed to the handful of Republican senators who control the fate of Donald Trump’s upcoming Supreme Court nominee and framed the firestorm over the vacancy as a referendum on Obamacare, union rights and Dreamers.

In his first extended remarks following the death Friday of Justice Ruth Bader Ginsburg, Biden accused Republicans who would "jam this nomination through" of hypocrisy, while seeking to reason with other GOP senators to heed her final wishes — "not as a personal service to her, but as a service to the country at a crossroads."

“Please follow your conscience,” Biden said from the National Constitution Center in Philadelphia. “Don't vote to confirm anyone nominated under the circumstances President Trump and Senator McConnell have created. Don't go there. Uphold your constitutional duty, your conscience, let the people speak. Cool the flames that have been engulfing our country. We can't ignore the cherished system of checks and balances.”

Biden’s speech, measured in tone and scope, encapsulated the foundation for his campaign. He did not hint at any plans to break from his traditionalist mold to back progressive-favored proposals like packing the high court. He also resisted calls from Republicans and some Democrats to release a list of potential Supreme Court nominees, arguing it could influence their decision-making and needlessly subject them to months of unfair scrutiny.

Instead, Biden said if he wins, he’ll make his choice after consulting Republicans and Democrats in Senate and seeking their advice and asking for their consent.

“If Donald Trump wins the election, then the Senate should move on his selection and weigh the nominee he chooses fairly," Biden said. "But if I win this election, President Trump’s nominee should be withdrawn and I should be the one who nominates Justice Ginsburg’s successor.”

While engaging holdout Republicans, Biden repeatedly painted the Trump-Mitch McConnell position to swiftly fill the seat as driven by a craven thirst for power.

He pointed to McConnell’s refusal to take up former President Barack Obama's nominee to replace Justice Antonin Scalia in 2016, Merrick Garland. McConnell held up the nomination starting about nine months before that election, Biden noted; this opening comes less than seven weeks before the election.

"To jam this nomination through the Senate is just an exercise in raw political power," Biden said. And "I don’t believe the people of this nation will stand for it."

Biden referred to the 2016 precedent created by the GOP leader as “the McConnell Rule: absolutely no hearing and no vote for a nominee in an election year. Period. No caveats.” He also called out then-chair of the Judiciary Committee, Sen. Chuck Grassley, as well as Sen. Lindsey Graham, the current chair, for piously taking similar positions at the time.

Biden declined to weigh in on the possibility of the Senate confirming a successor to Ginsburg on the eve of the election — or in lame duck this fall session should Trump. Even going there would concede that Democrats have already lost, he said.

"And I’m not going to assume failure at this point," Biden said. "I believe the voices of the American people should be heard."

To that end, he specifically pointed to the millions of Americans who are already voting in states that allow it.

McConnell can only lose three Republicans, as every Democrat is expected to back Minority Leader Chuck Schumer in urging Ginsburg’s seat not be filled until 2021. But they were dealt a blow when Sen. Lamar Alexander (R-Tenn.) announced on Sunday that he's comfortable with moving forward. Attention now shifts to Sen. Mitt Romney (R-Utah) and Grassley, among others.

Biden, his running mate Kamala Harris, who serves on the Senate Judiciary Committee, and their staffs have been in close contact and are coordinating regularly with Democratic leaders on Capitol Hill, aides said.

A Biden aide described them as unified in the belief that the Supreme Court fight underscores the importance of the election, particularly around health care during the pandemic, with the Trump administration trying to undermine the Affordable Care Act in the courts.

While Trump has pivoted hard to the nomination fight, trying to turn the page in an election dominated by the pandemic and spiraling economy, Biden in the speech sought to set the vacancy among a broader array of policies that are on the line this fall.

"There is so much at stake — the right to health care, clean air and water, and equal pay for equal work," he said. "The rights of voters, immigrants, women, and workers. And right now, our country faces a choice. A choice about whether we can come back from the brink."

Biden said he attended mass Sunday morning and prayed for the late justice who has become a cultural icon. As hundreds gathered outside the Supreme Court for a candlelight vigil, Biden spoke Saturday evening with Ginsburg's family. They told him that until the end, she held their hands and gave them strength and purpose to carry on.

Turning again to the Republican senators who could foil a confirmation, Biden said the country should be guided by her example — her willingness to listen to opposing viewpoints.

He noted that Ginsburg developed friendships with some of the most conservative justices, including Scalia.

"She did it without compromising her principles — or clouding her moral clarity — or losing her core principles," Biden said. "If she could do this, so can we."