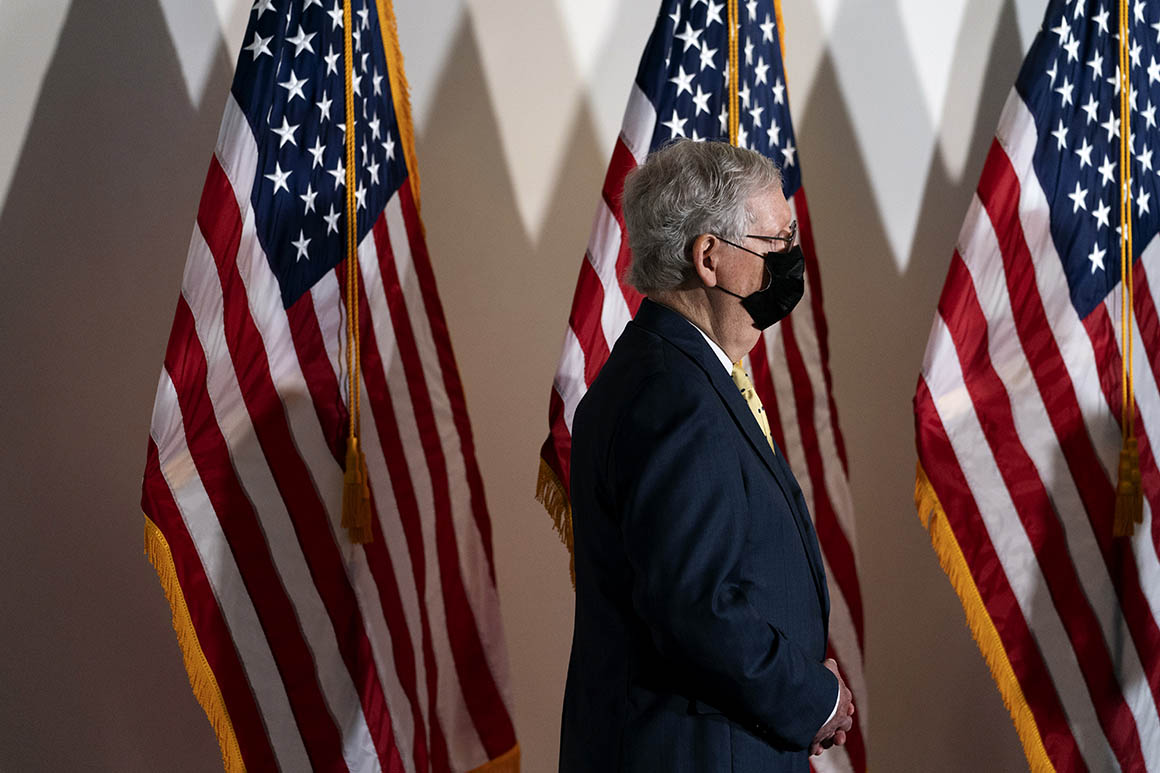 On Sunday, McConnell (R-Ky.) won the support of Sen. Lamar Alexander (R-Tenn.), who is retiring and was viewed as a potential swing vote as McConnell seeks to confirm Ginsburg‘s replacement as soon as possible.

“No one should be surprised that a Republican Senate majority would vote on a Republican president’s Supreme Court nomination, even during a presidential election year,” Alexander said in a statement. “The Constitution gives senators the power to do it. The voters who elected them expect it.”

Sen. Roy Blunt (R-Mo.), a member of McConnell’s leadership team, also backed the majority leader over the weekend, as did Sen. Rob Portman (R-Ohio), a moderate.

“For weeks, I have stated that I would not support taking up a potential Supreme Court vacancy this close to the election,” Murkowski said in a statement. “Sadly, what was then a hypothetical is now our reality, but my position has not changed.”

McConnell can afford to lose only three Republicans, and all Democrats are expected to back Minority Leader Chuck Schumer (D-N.Y.) in arguing that Ginsburg’s seat should not be filled until 2021. Sens. Mitt Romney (R-Utah) and Cory Gardner (R-Colo.) are believed to be possible swing votes, but neither has announced a position yet.

Murkowski, who has frequently bucked her party’s leadership, noted that she did not support President Barack Obama’s effort to fill Justice Antonin Scalia’s seat in 2016, and that “the same standard must apply” this election year.

Collins on Saturday said the winner of the Nov. 3 presidential election should nominate Ginsburg’s replacement, though she is not opposed to the Senate Judiciary Committee‘s beginning to process President Donald Trump’s nominee before Election Day. McConnell has not specified an exact time frame for processing a nomination, which on average takes around two months from start to finish.

When the Senate returns to Washington on Monday, McConnell’s leadership team is expected to meet to discuss the GOP strategy. And on Tuesday, all Senate Republicans will gather for the first time since Ginsburg’s death on Friday evening.

Marc Short, Vice President Mike Pence’s chief of staff, said on Sunday that Trump had already narrowed his list and was “prepared to make a nomination very soon.” Trump is expected to announce a nominee later this week, and has said he will choose a woman.

“It’s certainly possible” a nominee could be confirmed before Election Day, Short told CNN’s Jake Tapper on “State of the Union.” “But I think that the president’s obligation is to make the nomination. We’ll leave the timetable to Leader McConnell.”

Democrats have mounted an intense pressure campaign amid McConnell’s stated intention to fill the vacancy immediately, noting that Senate Republicans blocked Obama’s nominee to replace Scalia in 2016, Merrick Garland, from being considered. At the time, Republicans said it was too close to an election for a Senate and White House controlled by different parties to process a Supreme Court nomination.

On Sunday afternoon, Joe Biden, the Democratic presidential nominee, appealed to the handful of Republican senators who control the fate of the next nomination.

“Please follow your conscience,” Biden said in a speech in Philadelphia. “Don't vote to confirm anyone nominated under the circumstances President Trump and Senator McConnell have created. Don't go there. Uphold your constitutional duty, your conscience, let the people speak. Cool the flames that have been engulfing our country. We can‘t ignore the cherished system of checks and balances.”

Democratic lawmakers earlier in the day noted that Election Day is only six weeks away and early voting has already begun in several states. Ginsburg’s absence leaves the court with a 5-3 split in favor of conservatives, and the high court is set to take up a case that could determine the fate of Obamacare just one week after the election.

Sen. Tim Kaine (D-Va.) told POLITICO that Republicans essentially created a new rule in 2016 that the Senate should wait to advance a Supreme Court nominee in the final year of a presidential term, and that Democrats are united in holding them to that.

“It doesn’t really matter who it is,” he said of the future nominee. “We are unified in the proposition that we want to hold the Republicans to their word, and we will not entertain a nominee until after Inauguration Day.”

Senate Democrats have limited tools at their disposal as the minority party. Sen. John Barrasso of Wyoming, chairman of the Senate GOP conference, was adamant that the process would move forward this year.

“The president is going to make a nomination,” he told NBC’s Chuck Todd on “Meet the Press.” “We will hold hearings, and there will be a vote on the floor of the United States Senate this year.”

Sen. Ted Cruz of Texas went even further, insisting that confirming a nominee before the Nov. 3 election was “the right thing to do.” Cruz cited in 2016 “a long tradition” of not considering Supreme Court nominees in an election year.

At least three Republicans recalled on the Sunday shows that there have been 29 vacancies in a presidential election year, and that presidents named a nominee all 29 times. The big difference, Cruz told George Stephanopoulos on ABC’s “This Week,” is that the Senate traditionally confirms that nominee when the Senate majority and president are members of the same party.

“It’s not just simply your party, my party,” he said. “The reason is, it’s a question of checks and balances. In order for a Supreme Court nomination to go forward, you have to have the president and the Senate.”

Sen. Tom Cotton of Arkansas said it’s “too soon to say right now” whether Republicans would confirm a nominee before the election, but he insisted the Senate would move forward “without delay,” echoing the president’s language.

“In 2014, the American people elected a Republican majority to the Senate to put the brakes on President Obama’s judicial nominations. In 2018, we had a referendum on this question,” Cotton told Chris Wallace on “Fox News Sunday,” citing the contentious confirmation of Justice Brett Kavanaugh.

Democrats who appeared on the Sunday shows were uniformly opposed to the Senate’s advancing Trump’s future nominee, especially given that polling shows Biden currently favored to win the election and Democrats could regain control of the Senate.

But the party appeared to try several different tacks rather than one unified strategy. Sen. Chris Coons of Delaware said he would personally appeal to his Republican colleagues, who he suggested should respect the 2016 precedent they set. Sen. Amy Klobuchar of Minnesota and former President Bill Clinton both recalled that President Abraham Lincoln allowed the election to occur before making a Supreme Court nomination when a vacancy opened this close to Election Day.

And Speaker Nancy Pelosi of California said the president’s rush to nominate a replacement was evidence that he is more focused on crushing the Affordable Care Act than the coronavirus, which has killed nearly 200,000 Americans.

Pelosi shut down the possibility of Democrats leveraging government funding to slow down the Senate’s confirmation process but did maintain that Democrats have “arrows in our quiver” to stop the Senate from advancing a nominee. She declined, however, to discuss their options.

NPR reported on Friday that Ginsburg had dictated to her granddaughter, “My most fervent wish is that I will not be replaced until a new president is installed.” Republicans have largely dismissed that desire.

“She’s certainly a giant upon whose shoulders many will stand, and she blazed a trail for many women in the legal profession,” said Short, the vice president‘s chief of staff. “But the decision to nominate does not lie with her.”

Clinton, who nominated Ginsburg to the high court and appeared on three programs Sunday, said it would be worth waiting to see whether people care that several senators, including some up for reelection this fall, are going to go against their positions from 2016.

“It would be very interesting to see whether their position could only be justified as: ‘If my party can do it, now I’m for it. If their party can do it, then I’m against it,” Clinton said on “This Week.” “And if that’s the rule of life in America, then who knows what the consequences will be.”

Marianne LeVine and Christopher Cadelago contributed to this report.