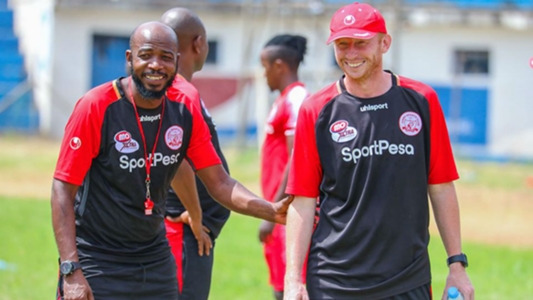 Simba SC coach Sven Vandenbroeck has stated their plan is to win four matches to bag the Mainland Premier League title in earnest and set focus on the FA Cup competition.

Simba are in prime position to defend their league title as they sit at the top of the table with 71 points, 17 more than the second-placed Azam FC.

The league is expected to return from next month and Vandenbroeck, who joined the club after Patrick Aussems was sacked in December, hopes the target will be achieved.

“The plan of the team is to win 12 points and then we reset our focus on the FA Cup competition,” Vandenbroeck told the club's website on Wednesday.

The Belgian tactician also lauded the government's directive that all their matches be played in Dar es Salaam.

“Playing all matches at one centre will have the home teams enjoy advantages but again it will be a great advantage for the country because the spread of Covid-19 will be checked effectively,” added the former Zambia national team head coach.

Vandenbroeck also spoke about how he is expecting to find his players who have been away since mid-April when the Tanzanian Football Federation (TFF) suspended the leagues.

“I am confident the majority of them adhered to the training programmes that were given after the league was suspended,” said Vandenbroeck

“We will get to know the exact state of their physical fitness once we start training again. We will start from there.”

“For now, our energies and focus is on the defence of the league title and winning the FA Cup and the rest will follow at a later time. Those are our major targets for now,” Mazingisa told the club's portal.

The CEO also spoke about their transfer plans.

“On matters transfers, we will wait until when the season is concluded so that we put everything on the public limelight. What I can assure for now is that we are going to sign great players,” concluded the official.

Simba players have already returned and are expected to start training after their Covid-19 tests on Wednesday.