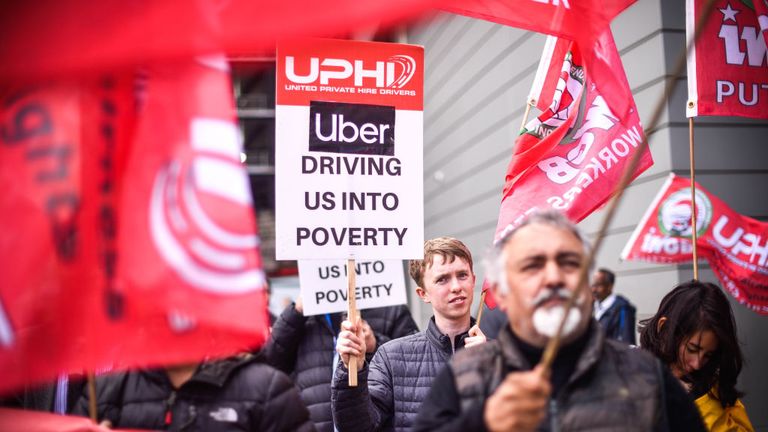 A union representing gig economy workers, including Uber drivers and medical couriers, is preparing to sue the government to ensure they are covered by health and safety laws.

According to the Independent Workers' Union of Great Britain (IWGB), health and safety equipment is being denied to hundreds of thousands of workers who should be legally entitled to it.

Gig economy workers, including security guards and taxi drivers, are among those most likely to die from COVID-19, according to the Office for National Statistics.

But legal requirements to protect workers are slipping through the cracks between EU and British law, because the employment status of these workers is contested.

In the EU, health and safety law covers all workers, but in the UK it only protects employees. Many companies which use gig economy workers do not class these workers as employees.

Uber has been appealing against successive court cases to reclassify the employment status of its drivers since 2016.

The IWGB has sent a letter to the government ahead of launching a judicial review to see if the UK has "failed in its obligation to transpose health and safety directives from EU law into UK law".

According to the union, if the government loses the review it would be forced to "extend health and safety protections to all 'workers', including hundreds of thousands in the so-called 'gig economy'".

Jason Moyer-Lee, IWGB's general secretary, said: "As the government looks to ease the lockdown in the midst of the pandemic, health and safety at work has never been more important.

"It is crucial that exploitative employers like Uber know they must protect the health and safety of their workers and that the government brings the criminal prosecutions necessary to enforce this law.

"The UK is already compelled by EU law to extend health and safety protections to workers; it's a shame the government would rather litigate than comply," Mr Moyer-Lee added.

A spokesperson for Uber told Sky News: "Uber has introduced measures to ensure that every driver can access the PPE they need for free to drive safely on the Uber app.

"As well as providing drivers with free sanitising products, Uber is providing over one million free PPE items, as well as directly reimbursing drivers if they choose to source the required PPE themselves."

If you would like to contact Alexander Martin, you can reach him securely using the private messaging app Signal on +44 (0)7970 376 704 or at aj.martin@sky.uk