Woman saved after breast implant deflected bullet away from her heart 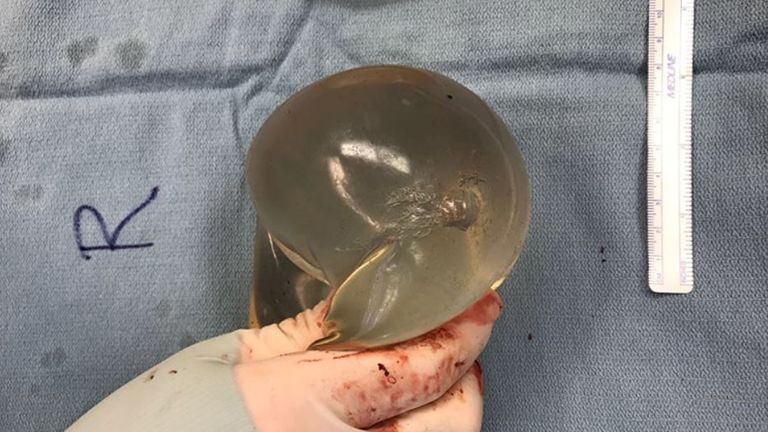 Woman saved after breast implant deflected bullet away from her heart

A woman was saved from death by her breast implants after they deflected a bullet when she was shot in the chest, experts have said.

The 30-year-old woman, who has not been named, was walking down the street in Canada when she was shot.

She only realised she had been shot when she felt "heat and pain" in her chest and saw blood when she looked down, according to a report published in the Sage journal.

The victim then was treated at the McLean Clinic in Mississauga, Ontario, where she had her implants removed.

The report added the only additional injuries she had was a fractured rib.

During surgery, surgeons removed the woman's left breast implant and found a "bullet tract" which aligned with the entry wound, but no bullet.

They later examined the right implant and found it had been flipped upside down and the dome of the implant was damaged, and the bullet was located beneath the woman's right breast in her chest.

They then removed the bullet and gave it to the police so it could be forensically examined.

Photographs taken by the surgeons show where the bullet went through the left implant and landed in her right implant.

Dr Giancarlo McEvenue, who wrote the paper, said the woman's left breast implant subsequently must have "deflected" the bullet from her heart and saved her life.

He said: "Clinical examination revealed a comfortable patient in no distress, with a single entry wound in the superior pole of the left breast…based on trajectory of bullet entry clinically and evaluation radiologically, the only source of bullet deflection of the bullet is the left breast implant.

"This implant overlies the heart and intrathoracic cavity and therefore likely saved the women's life."

The firearm was never recovered and the gunman was not found, he added.

The case is one of only five incidents where patients' implants have blocked bullets, including three which are thought to have saved victims' lives.

Dr McEvenue said: "Although rare, these observations lend support to the hypothesis that indeed breast implants can save lives."