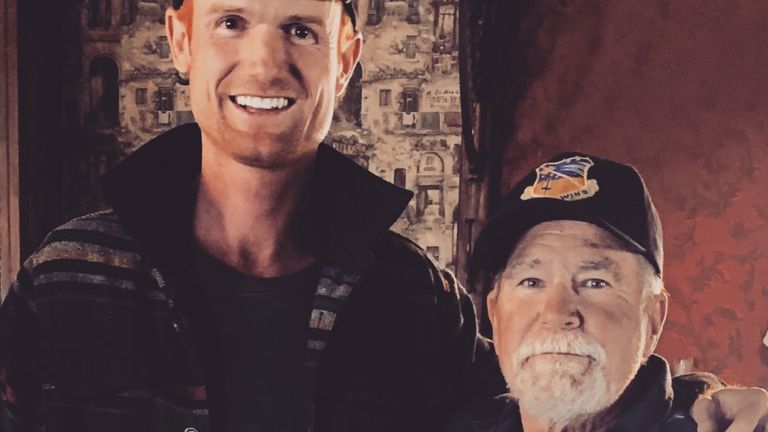 A man who bought a ghost town with a sinister past has been forced to quarantine there after a snowstorm left him trapped.

Brent Underwood says he has been resorting to melting snow for water after his week-long stay in Cerro Gordo, California, was unexpectedly and significantly prolonged by nationwide coronavirus lockdown measures.

He told Sky News he had arrived during good weather a month ago, but that four consecutive days of snow had left him stuck there in solitude ever since.

"I think one morning I woke up and saw the snow was over my truck and I thought 'what have I got myself into?'" he said.

"I managed to calm myself down by the following day and decided I would just use my time here productively.

Having bought the former silver mining town for £1.1m ($1.4m) in 2018, he had mainly left it in the hands of full-time caretaker of 21 years, Robert Desmarais.

But as restrictions designed to curb the spread of COVID-19 began, the 32-year-old marketer agreed to take over upkeep of the 400-acre space for a week while Mr Desmarais visited Arizona to check on his wife.

It is 26 miles from the nearest grocery store, but four feet of snow means travelling any further than a few hundred yards is currently impossible.

And despite previously being a sceptic, Mr Underwood said his experiences during his time alone in the 22-building town had led him to believe rumours it is haunted.

He said the town had once been the subject of an episode of the TV show Ghost Adventures, which concluded it was haunted by the ghosts of two children who died after being trapped in a closet.

He said: "Apart from the ghosts and maybe a few bobcats, I'm alone. So I've been having visitors, but not necessarily welcome ones.

"I've heard some strange sounds and I had a book fall off a shelf, for no apparent reason.

"Having said that, I've never really felt under threat from any spirits, so maybe we've found a way to coexist peacefully.

"I'm definitely open-minded about it all now."

While he has no more fresh food such as bread a vegetables, Mr Underwood said he had enough rice and tinned goods to survive until conditions allowed travel in and out of the town.

"It's quite cold and I'm quite hungry, but I know there are lots of people around the world in a far worse position," he said.

"It's been very interesting, but I've been trying to have fun with it.

"I figured I'm not getting out any time soon, so I've been trying to treat each day as an adventure."

He said Cerro Gordo had been largely uninhabited for around 100 years, after mining operations there ceased in the early 1900s.

"A lot of the buildings were exactly as they are now, so it's full of history.

"It wasn't something that I planned but when I do see what's happening elsewhere in the world, it does make me think I may want to stay here even when the snow has cleared.

"Being here this long wasn't something that I planned, but it's given me a great chance to learn more about the place."

While he had planned to begin allowing Airbnb visitors to the site in May, he said he now hoped to do so towards the end of the summer, depending on restrictions still in place.

As for entertainment during his enforced solitude, Mr Underwood said patchy internet connection meant he had been deprived of the ability to stream films and TV shows to distract himself like so many others enduring quarantine.

"I've certainly missed out on all the Netflix phenomena," he said.

"When I do make it on to social media, I keep seeing all these memes about Tiger King and I have no idea what people are talking about."