US copies UK's #LightItBlue campaign - and they're not messing about 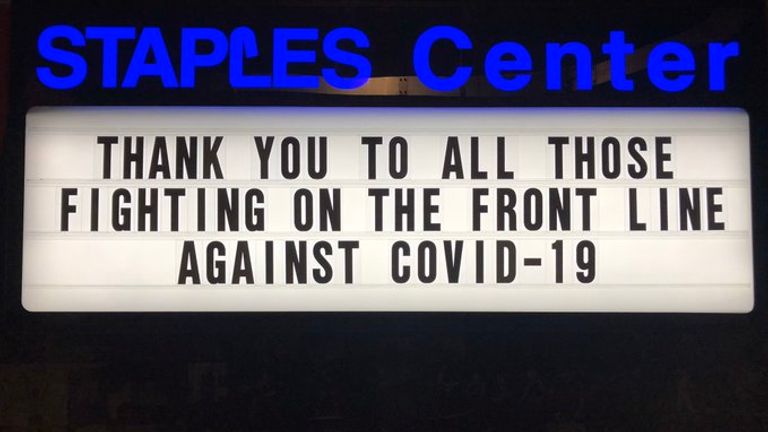 US copies UK's #LightItBlue campaign - and they're not messing about

Following in the footsteps of the UK #LightItBlue campaign, the US joined in a show of colour as a way to say thank-you to essential staff in the fight against COVID-19.

More than 350 venues including Niagara Falls, the World Trade Center and Madison Square Garden turning into a beacon of blue amid the outbreak.

The #LightItBlue tribute was marked in the normally bustling Times Square, which now lies eerily empty of people.

Staples Center arena in downtown Los Angeles shone blue with messages of thanks.

Soldier Field in Chicago, the Bank of America Plaza in Dallas and Boston City Hall all did their part too.

LED lights were used to colour historic buildings and sports, civic and arts organisations from coast to coast.

At a time of isolation and uncertainty, the thank-you effort aims to create a universal moment of solidarity and support.

The #LightItBlue campaign creator Gary White says the initiative has really brought the community together.

"Each week new venues and landmarks turn blue as a show of solidarity and thanks. We're pleased that our friends in the USA are joining to start a global thank-you for all healthcare workers," he said.

While the US doesn't have a national health service, the tribute recognises the millions of essential workers continuing in their roles, risking their own health to help others during the pandemic.

America will now continue the campaign every week during the pandemic.

For the last two weeks, UK landmarks including Windsor Castle, Royal Albert Hall and Wembley Stadium have lit up blue at 8pm on Thursday evening.

The visual show of national gratitude also coincides with the Clap For Carers campaign, which sees people step out onto their doorsteps and balconies, and come to their windows at the same time to give key workers a round of applause.

Tens of thousands have been taking part, including politicians, celebrities and royalty.

The UK campaign also invites Britons to continue to show thanks and spread positivity by creating blue-themed images and videos and sharing them online with #MakeItBlue and challenging others to follow suit.