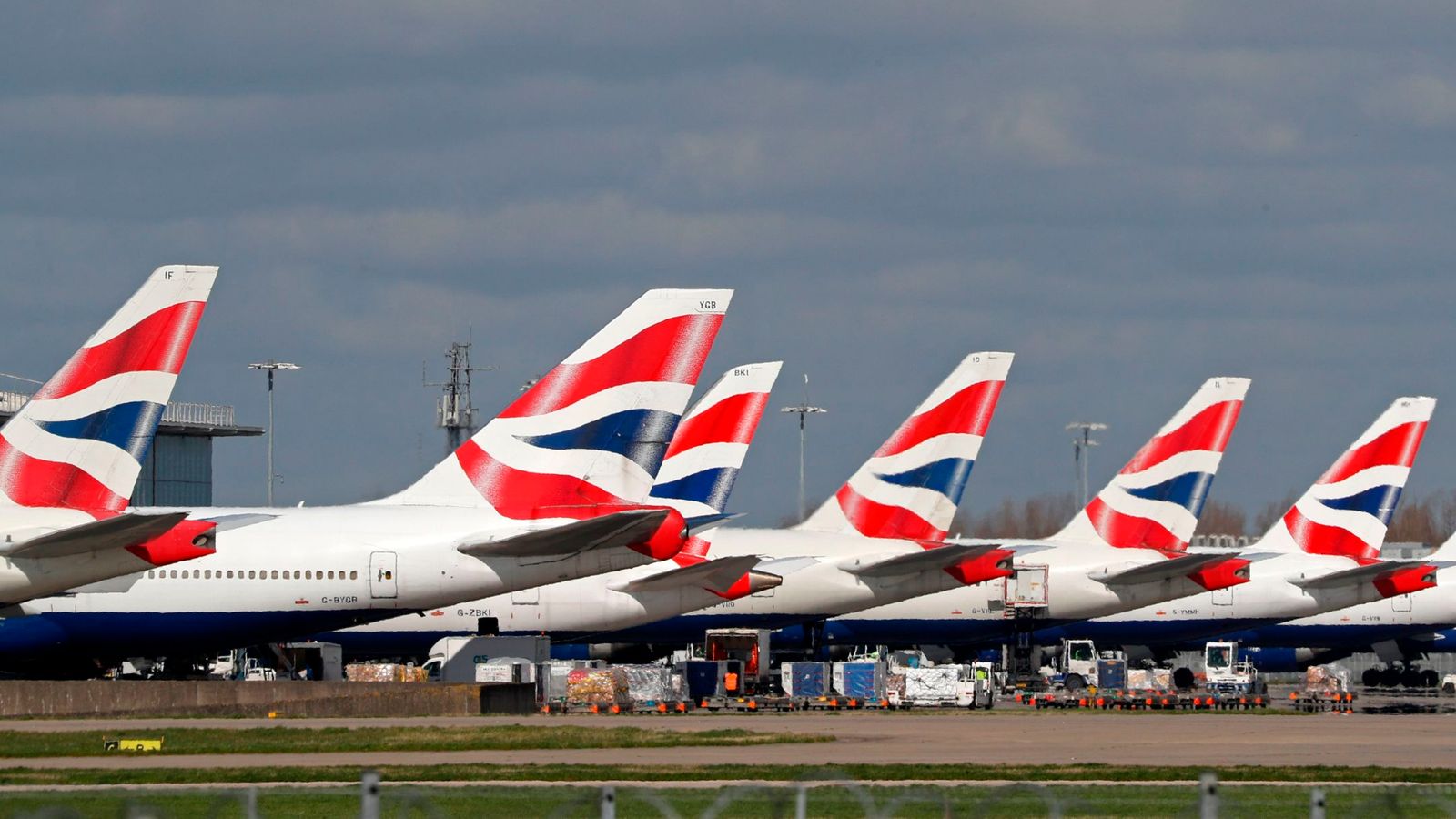 Britain's biggest airlines have been warned that they will only have access to further financial support from taxpayers "as a last resort", as the government insisted that they must first turn to existing shareholders and lenders amid the COVID-19 pandemic.

In a letter seen by Sky News, Rishi Sunak, the chancellor, told the aviation industry that the array of aid schemes announced by the Treasury in the last ten days - including VAT deferrals and grants to cover employees' salaries - would provide significant assistance to cash-strapped airlines.

"The priority for all companies should now be to reassess their cashflow positions in the light of Friday's announcements," Mr Sunak wrote.

"We would expect all companies to be pursuing all possible actions to preserve cash and maximise liquidity, including engaging with shareholders, lenders and the markets and utilising all available assets and facilities."

The chancellor told carriers including easyJet, British Airways and Virgin Atlantic that the "significant importance of the aviation sector to our economy and economic recovery [means that] the government is prepared to enter negotiations with individual companies seeking bespoke support as a last resort, having exhausted other options".

He warned, however, that additional support "would only be possible if all commercial avenues have been fully explored, including raising further capital from existing investors and discussing arrangements with financial stakeholders".

"Terms would be structured to protect taxpayers' interest, and the government would expect to have regard to factors including but not limited to whether the business makes a material contribution to the economic activity of the UK, the importance of maintaining a thriving competitive aviation sector in the UK to deliver connectivity and the equitable and fair treatment across businesses in the sector."

Mr Sunak's comments hold open the possibility that the government could take a stake in some British airlines, but underline the remoteness of such a prospect.

Weekend reports suggested that such a plan was at an advanced stage, which industry and government insiders sought to play down.

One airline executive said the industry was pushing for a "bespoke" credit facility rather than any taxpayer injection of equity.

Nevertheless, the chancellor's comments will mean that big airline shareholders such as easyJet's Sir Stelios Haji-Ioannou and Sir Richard Branson's Virgin Group may need to inject further sums before they can turn to the government for more support.

In his letter, Mr Sunak also hinted that the Treasury was close to unveiling a further credit facility for companies which do not have an investment grade credit rating.

"I have listened to feedback that suggests some companies including airlines are uncertain whether they can access this Facility - which is for companies rated as investment grade or equivalent," he wrote.

"I am in discussions to resolve this uncertainty and further announcements will be made shortly."

Sky News revealed last week that Rothschild, the investment bank, had been asked to advise ministers on a package of measures, and that one option could include direct taxpayer investments in airline shares.

Sources say the industry has been pressing ministers to provide billions of pounds of liquidity to the sector, as well as freezing air traffic control charges and agreeing to a four-month moratorium on EC261, the European law which requires airlines to compensate customers for cancelled flights

A number of airline executives, including IAG's Willie Walsh, Virgin Atlantic chief Shai Weiss and Johan Lundgren, easyJet CEO, have taken temporary pay cuts in the last ten days as the scale of the crisis facing their industry became apparent.

Willie Walsh, the chief executive of BA's parent company has insisted that it has no need for state aid because of the strength of its balance sheet.

That message was at odds with a memo issued by BA's chief executive, Alex Cruz, last week when he referred to making cost reductions that were necessary to ensure the company's survival.

BA staff were recently informed that they would not be paid bonuses for last year, despite reporting a near-record financial performance.