Emergency stimulus to soar above $1 trillion 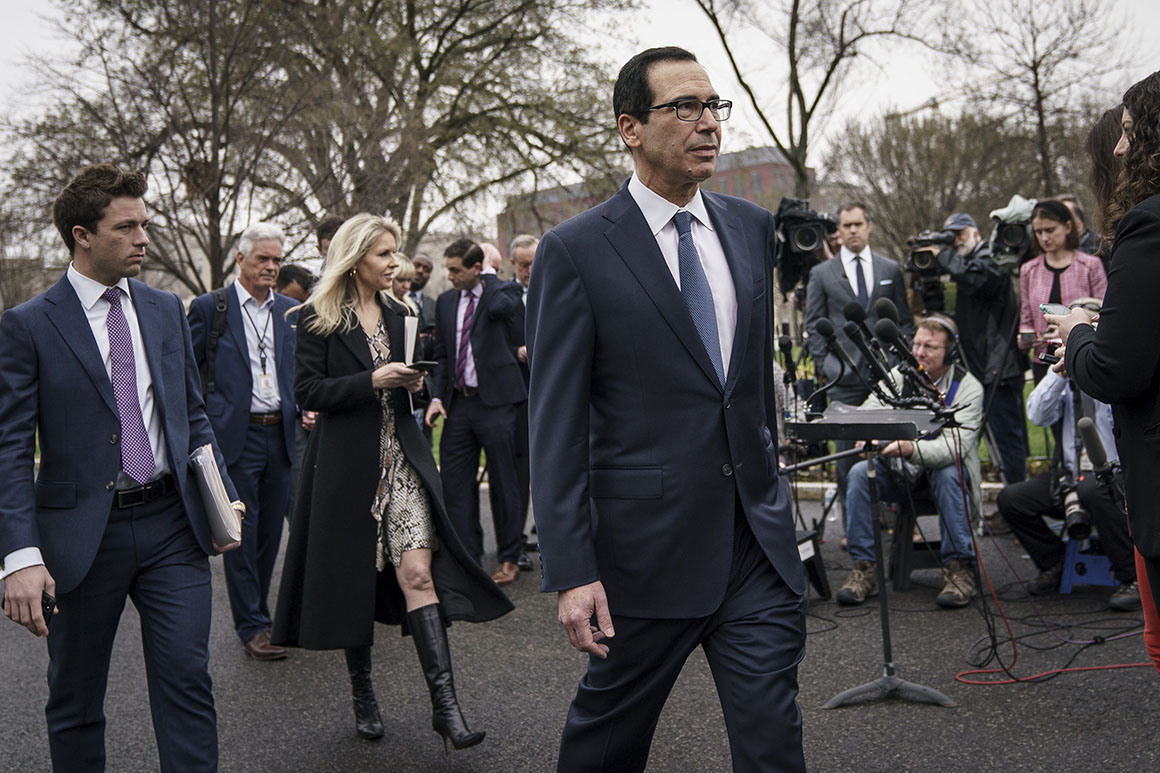 Emergency stimulus to soar above $1 trillion

The government’s economic stimulus is set to quickly balloon into trillion-dollar territory in the coming days, the largest rescue in modern American history, as major industries flood the Trump administration and Capitol Hill for aid while huge swaths of the economy stall from the coronavirus crisis.

Treasury Secretary Steven Mnuchin will meet with Senate Republicans behind closed doors on Tuesday to present lawmakers with options for aid to airlines, hotels, casinos and small-to-medium-sized businesses. The White House was pushing for a package of more than $800 billion, POLITICO reported Monday, and on Tuesday the Treasury Department was preparing to unveil a package of $850 billion including more than $50 billion for the airline industry, $250 billion for small-business support and $500 billion for a payroll tax holiday. A senior administration official acknowledged the proposal could climb above that Tuesday by the time it’s unveiled.

Democrats are pushing their own package of provisions that don’t overlap entirely with the GOP pitch. Senate Majority Leader Chuck Schumer (D-N.Y.) and other Democrats are pitching a package of “at least” $750 billion that is expected to include more emergency aid for hospitals, expanded unemployment insurance, more funds for small business, help with child care, and food assistance for seniors.

The size and scope of the package are morphing rapidly as the economic and market damage mounts. Senate Republicans and the White House are exploring how to fast-track existing legislation with the upcoming stimulus packages.

The Trump administration’s goal is to provide individuals and companies with enough cash through emergency payments, loans, tax deferrals or temporary tax cuts to help them survive the sudden downturn.

CEOs, union leaders and lobbyists have been warning the administration of mass layoffs if the government does not help soon. Senators seem poised to act this week, while the House is still in recess.

Cobbling together a stimulus package worth more than $1 trillion would mark a major ideological shift for Republicans, who spent years decrying debt and government bailouts following the 2008 global financial crisis. But with uncertainty surrounding the spread of the coronavirus and the volatility in the stock market, the White House does not seem concerned about the price tag — only stopping the financial freefall.

Other ideas that have circulated throughout the administration in recent days include inserting into the economic stimulus package a large-scale public works project; tweaks to the EB-5 visa program to boost foreign investment; tariff relief; and even a one-time cash payment to Americans between $500 to $750, according to people close to the administration.

The Federal Reserve and Treasury are already launching programs to provide support through emergency powers. The central bank on Tuesday announced a new lending program, the Commercial Paper Funding Facility, under its authority under Section 13(3) of the Federal Reserve Act. The Treasury Department will provide taxpayer backing for the effort with $10 billion in capital from its Exchange Stabilization Fund.

Some senior White House officials are also pushing Treasury to issue long-term bonds that would mature in 50 or 100 years to help cover the cost of the stimulus package. Mnuchin has said repeatedly in the past that he is considering issuing such bonds to take advantage of interest rates that the Fed has now pushed to near zero. National Economic Council Director Larry Kudlow has long advocated for the issuance of such bonds, an idea also supported by outside economic advisers to the White House.

Republican Sen. Mitt Romney in recent days has called for giving every American over the age of 18 a check for $1,000 as a form of economic stimulus — a move the administration was moving toward by Tuesday.

The coronavirus relief packages under consideration now by Congress are set to eclipse prior efforts.

The economic stimulus program cleared through Congress in early 2009 under the Obama administration was nearly $800 billion, including a tax cut, infrastructure and numerous other provisions.

The bank bailout plan passed by Congress in 2008 under the Bush administration — formally the Troubled Asset Relief Program or TARP — authorized $700 billion originally intended to buy toxic assets from banks, mainly mortgage-backed securities that plunged in value during the housing crisis. The money was later diverted to multiple different programs to inject capital into banks.

The TARP program ultimately disbursed around $426 billion and eventually recovered $441 billion, earning the Treasury Department a nominal profit of around $15 billion. That figure remains controversial. Taking into account inflation from the time of the bailouts, the government actually lost around $25 billion on the program.

It also generated widespread anger that banks and bankers got bailed out while ordinary citizens received far less. The Trump administration is well aware of this history and taking pains to avoid the same optics; top economic officials like Mnuchin and other senior aides around Trump keep emphasizing the need to help small and medium-sized businesses as well.

“Everyone will need assistance and that is the bottom line. This is the demand issue because consumers have stopped spending,” said Alfredo Ortiz, President and CEO of the Job Creators Network, a conservative-leaning group founded by entrepreneurs like The Home Depot founder, Bernie Marcus. “Every industry will need some level of assistance. In the past, Main Street America has not been as represented in some economic stimulus packages.”

Ortiz said he has been in touch directly with Mnuchin, who seems very amenable to including relief for small-to-medium-sized businesses in any package.

The TARP program also drew widespread criticism for creating a moral hazard – banks could feel emboldened to take risks knowing the government would rescue them -- while creating fewer and even larger banks that now enjoyed a bigger federal backstop. Part of the reluctance among members of Congress and the administration to direct cash payments to individual industries like airlines and hotels stems from the TARP experience and deep voter resentment to corporations and their highly paid executives getting aid over regular citizens.

Senior White House officials know that direct aid to airlines in particular may be necessary to avoid crippling bankruptcies, but they are leery of being seen as handing out bailouts and want to be sure that any such aid is dwarfed by proposals that would direct cash to consumers.

As top economic officials and Senate leadership negotiate this stimulus package, Trump is spending the day on the phone with executives from the restaurant and tourism industries, supply retailers and wholesalers. Vice President Mike Pence is scheduled to meet with CEOs of major hotels including Hilton, Marriott, Hyatt and MGM Resorts International.