Markets attempt virus fightback on hopes of $850bn US stimulus 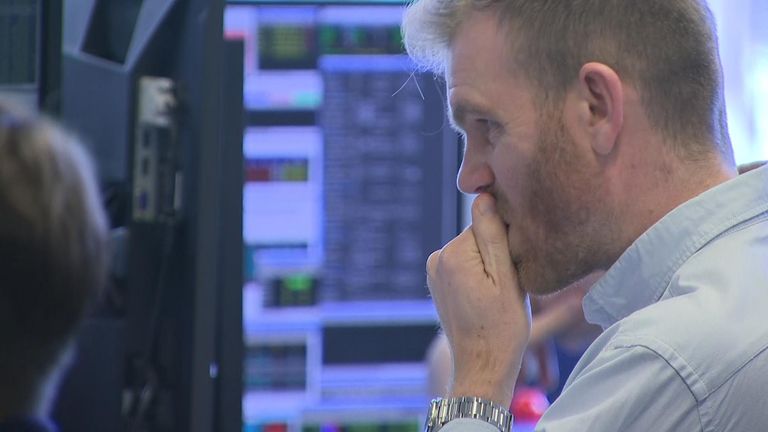 Markets attempt virus fightback on hopes of $850bn US stimulus

Stock markets are attempting a fightback despite a gradual shutdown in the global economy as coronavirus takes its toll on life as we know it.

Market analysts pegged tentative gains on hopes of a $850bn stimulus programme for the US economy and further support for financial markets from the country's central bank.

London's blue-chip index was up around 2% shortly after opening but wild volatility continued to grip values as more information on disruption caused by COVID-19 became available.

The extent of the damage is growing daily - with Laura Ashley the first retailer on the brink of collapse following a failure to secure new funding amid a dive in trading.

Catering firm Compass Group, which saw its shares dive after the UK government toughened its social distancing advice to include pubs, theatres and restaurants, saw its shares fall 15% after it forecast half-yearly operating profit would be well below expectations.

The steady feed of negative news prompted the Lloyd's of London insurance market to ask its members for estimates of their potential current and final losses from coronavirus.

European stocks were also attempting a recovery, despite the backdrop of deteriorating data, with both the French CAC and German DAX in positive territory.

On Wall Street, the Dow Jones Industrial Average opened more than 2% higher after recording its biggest daily points loss on record in the previous session.

Gains accelerated when it emerged the US stimulus package, proposed by Donald Trump's administration, was being put to political leaders on Capitol Hill.

It was said to include $50bn in support for airlines. The President promised, at a news conference, that the package of measures would be "big" and "bold".

ING analysts said in a note: "The main worry seems to be the central banks running out of policy space needed to combat the impact of the virus.

"And this now calls for a coordinated fiscal response by the governments."

Wells Fargo Securities forecast a recession for the US in the April-June quarter and Joel Prakken, chief US economist at IHS Markit, projects the economy will shrink at a 5.4% annualised rate during the quarter.

Francis Lun, a stock analyst in Hong Kong, said investors were going "bargain hunting", adding: "It's a see-saw battle between the bulls and the bears," he added. "I think right now the bulls are winning the upper hand. The key is that Hong Kong is dirt cheap."

Asia was also encouraged by news that US President Donald Trump's administration could offer support to airlines affected by the outbreak as part of a package to help businesses.

More than 175,000 people have been infected by COVID-19 worldwide, most of them in China. As at Tuesday morning, there were more than 1,500 cases in the UK and 55 people had died.

Sky News will broadcast a special programme at 6pm, with experts answering your questions #AskSkyNews at 12.30pm