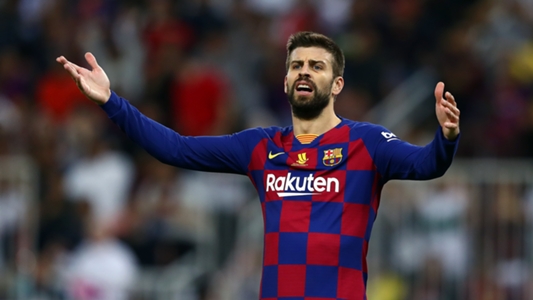 Gerard Pique believes Barcelona lost to the 'worst Real Madrid he has faced at the Bernabeu' as the Blaugrana crashed to a 2-0 defeat in El Clasico on Sunday night.

Goals from Vinicius Junior and Mariano Diaz earned Real a stunning victory with three points allowing the home side to leapfrog Barca into outright leadership on the La Liga standings.

With the score deadlocked without a goal at half-time, Pique revealed he was stunned at the low level of Real's performance in the first period and was disappointed to not take advantage.

"Real Madrid in the first half was the worst Madrid I've faced at the Bernabeu," Pique said in the mixed zone post-match.

"We missed a chance to hurt them.

"We have to play better than in second half, though, we lost balls and they grew in confidence."

When asked if he was bothered by losing to this standard of Real team, Pique replied: "Yes, they were giving off the worst possible impression and I don't say it as a criticism. We all have problems in our clubs.

"But I have the feeling that it's an important missed opportunity [for Barcelona]."

Pique was involved in Real's opener in the 71st minute with Vinicius' shot deflecting off the former Manchester United man to wrong foot Marc-Andre ter Stegen.

Mariano sealed the match in stoppage time as his scuffed strike from a tight angle bounced over Barca's German keeper.

Real now move one point ahead of Barcelona in the league standings - but Pique is adamant the title race is far from over.

"We still have a margin of improvement and it is enough for us to win La Liga if we do things well until the end of the season - but we have to do them well," Pique said.

"Whenever you lose [at the Bernabeu], you get hurt. Because of the importance of the game, the points ... If we won, it was an important step.

"We have to focus on improving, especially on our second half performance."

Barcelona's next match will come in La Liga on Saturday against Real Sociedad at Camp Nou, while Real travel to Betis on Sunday.