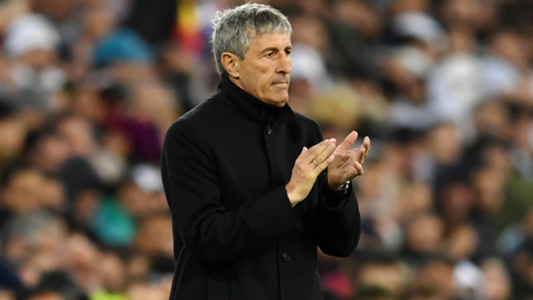 Quique Setien insisted there were still "many turns" still left in the La Liga title race after Barcelona gave up top spot with Sunday's Clasico loss to Real Madrid.

Vinicius Junior and Mariano Diaz scored in the second half as Madrid claimed a 2-0 win at the Santiago Bernabeu.

Madrid jumped a point clear courtesy of their victory, but the Barcelona coach said there was still plenty to play out.

"Last week, we were two points up. Now, they are one up. There is much left and this [title race] can take many turns," he told reporters after the game.

Setien added: "It's a tough defeat because these games affect you when you lose them, obviously, but we have the ability to recover.

"There are positive things to rescue and we will analyse what we have not done well."

Setien was pleased with the way his side started El Clasico, but felt they lost their way in the second half.

"I think we did a good first half and they did it in the second," he said.

"Even at the beginning of the second half we started quite well and we had it under control, but we started to have inaccuracies and they squeezed us very hard."

Despite the result Setien, coaching for the first time in Spain’s marquee domestic fixture said he enjoyed the experience.

"In such a game, one more enjoys suffering, the result is uncertain and when there is a chance for the opposition we live with tension just as when we created them.

“I did not alter the functioning of my life, I am still happy despite having lost a game that I did not expect to lose but that possibility is always there.

“Today we did things well despite how they turned out.”

One aspect of the game Setien was not happy with was his team’s failure to convert their chances, naming that his greatest frustration.