Coronavirus pandemic: It's not a question of if, but when 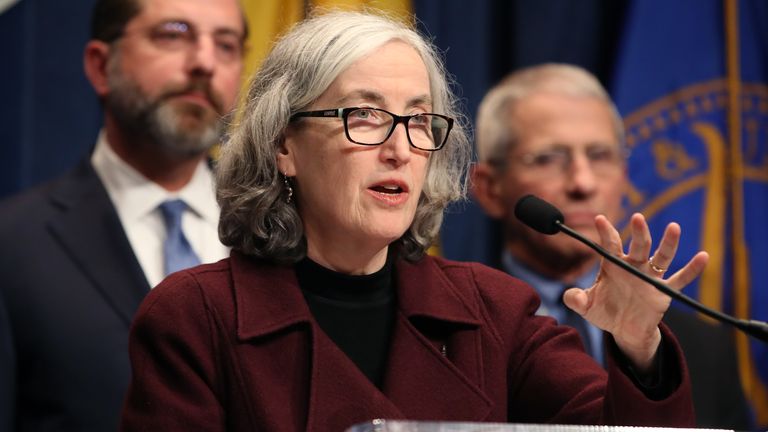 Coronavirus pandemic: It's not a question of if, but when

It's not a question of if, but a question of when - that's the warning from America's top medical scientists regarding the possibility of a coronavirus pandemic.

The warning from the US Centers for Disease Control and Prevention (CDC) came as England's chief medical officer, Professor Chris Whitty outlined plans to combat COVID-19, the respiratory disease caused by the coronavirus, in the event of a major outbreak, including the widespread closure of schools and limiting public transport.

Professor Whitty said families could also be asked to self-isolate if one of them had symptoms of the virus.

Meanwhile health ministers from seven European nations have met in Rome to discuss a coordinated response to the spread of the disease.

The European Commission, which enforces the rule book for the open-border Schengen Area, encouraged countries to adopt measures based on scientific evidence and "in coordination and not in a fragmented way", a spokeswoman said.

The comments from the CDC suggest an acceptance by the scientific community that a pandemic is almost inevitable.

CDC principal deputy director Dr Anne Schuchat said: "It's not a question of if.

"It's a question of when and how many people will be infected."

The organisation's head of respiratory diseases Nancy Messonnier added: "The data over the past week about the spread in other countries has raised our level of concern and expectation that we are going to have community spread here."

She added that "disruption to everyday life might be severe" and that businesses, schools and families should talk about how they would deal with the impact.

The epidemic appears to have peaked in China, where it originated and where more than 77,000 people have been infected and almost 2,700 have died.

However, the virus has surfaced in more than 30 other countries, with Italy, Iran and South Korea among the worst-affected.

Eleven people have died in Italy, with the number of confirmed infections rising to 322, most of them in the country's north.

In Iran, 95 cases have been confirmed, with 16 deaths.

Iran's deputy health minister and head of the country's anti-coronavirus taskforce, Iraj Harirchi, is among those who have tested positive for the virus after being seen sweating at a news conference on Monday.

So far 13 people in the UK have tested positive for COVID-19; the latest four were travellers rescued from the Diamond Princess cruise ship in Japan.

Worldwide, the total number of cases is 80,421, according to records being compiled by Johns Hopkins University in the US.

World markets have also been hit, as airline, leisure and travel-related companies suffer due to restrictions placed on those in countries trying to contain the virus. Stocks with exposure to China, such as luxury brands, have also been hurting.

COVID-19 has been fatal in 2% of reported cases, with the elderly and ill the most vulnerable, according to the World Health Organisation (WHO).

In the US, White House economic adviser Larry Kudlow said the economy would be able to survive any disruption from the virus.

He added: "Mr President, you need to get your act together now. This is a crisis."

US Secretary of State Mike Pompeo, accused the Chinese and Iranian of covering up information about the spread of the virus.

He said: "All nations, including Iran, should tell the truth about the coronavirus and cooperate with international aid organisations."