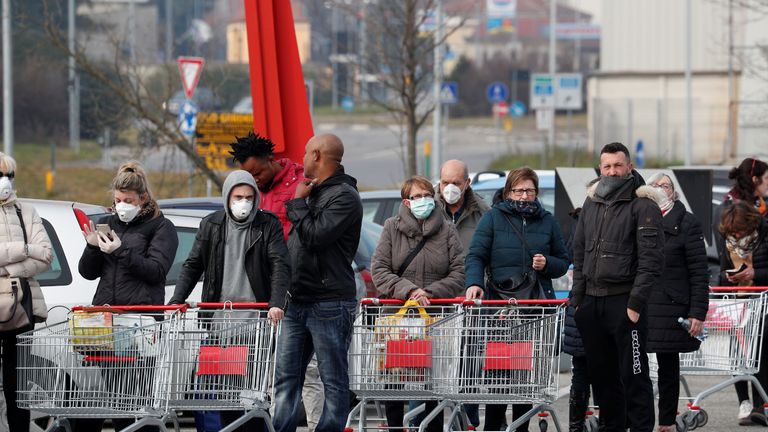 Austria has suspended all trains to and from Italy as the Italian authorities race to contain the biggest outbreak of coronavirus in Europe.

Around a dozen towns in Italy are in lockdown after the number of people in the country infected with COVID-19, the disease caused by the coronavirus, jumped sharply to above 130 - with three people dying in 48 hours.

On Sunday evening Austria refused entry to a train coming from Italy after the Italian State Railways informed Austrian train operator OBB that there were two people with fever symptoms on board.

The operator later confirmed to Sky News that all train traffic to and from Italy had been suspended.

"Tonight a train on its way from Venice to Munich was stopped at the Austrian border," Austria's interior ministry earlier confirmed.

It comes as authorities in the northern Italian regions of Lombardy and Veneto ordered schools and universities to close for at least a week, while museums and cinemas have been shut and the last two days of Venice Carnival called off.

The first fatality was a 78-year-old former construction company owner, who died in Padua in the Veneto region where he had been admitted along with another person who had tested positive for COVID-19.

A second patient - a 77-year-old woman - died hours later in Lombardy, while another woman with the virus in the region died on Sunday.

The regional governor of Veneto, Luca Zaia, said he had dealt with several natural disasters during his career, including floods and earthquakes, but "this is the absolutely worst problem that Veneto has faced".

Almost a dozen towns in Lombardy and Veneto, with a combined population of around 50,000 people, have effectively been placed under quarantine.

Residents have been urged to stay home and special permission is needed to enter or leave the designated areas.

Four Serie A football matches have been postponed in the wake of the virus outbreak, while the Women's Six Nations match between Italy and Scotland has been cancelled.

The biggest jump in cases of COVID-19 was reported by authorities in Lombardy, which includes the country's financial capital Milan, with 90 cases confirmed.

Authorities have expressed frustration they have not been able to track down the source of the virus spread in the north of Italy.

It surfaced in the region last week when an Italian man in his late 30s in Codogno became critically ill.

At first, it was widely presumed that the man was infected by an Italian friend he dined with and who recently returned from his job, based in Shanghai.

When the friend tested negative for the virus, attention turned to several Chinese people who live in town and who frequent the same cafe visited by the stricken man.

But Lombardy governor Attilio Fontana told reporters all of those Chinese people had tested negative too.

More than 2,460 people have been killed by the coronavirus outbreak, mostly in China.

There have been more than 78,800 suspected and confirmed cases of COVID-19 worldwide.