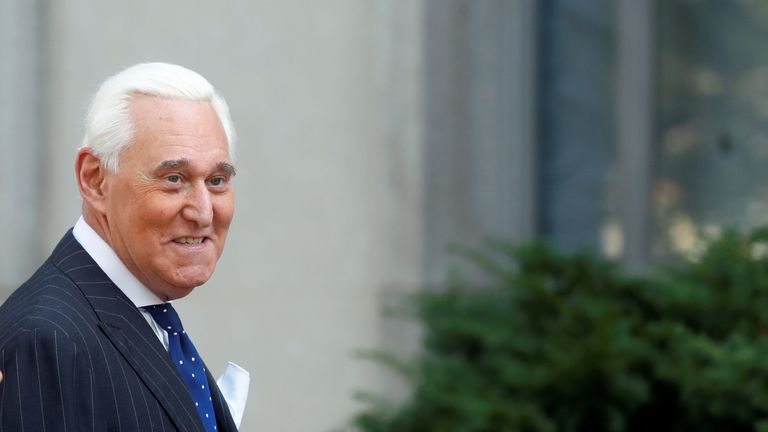 America's top lawyer has said Donald Trump's tweets "make it impossible for me to do my job".

But Attorney General William Barr, the head of the Department of Justice (DOJ), has insisted Mr Trump "has never asked me to do anything in a criminal case".

Responding to accusations the department bowed to Mr Trump's will to recommend less jail time for his former campaign adviser Roger Stone, Mr Barr admitted his job would be easier if the president stopped using Twitter to discuss prosecutions.

"I think it's time to stop the tweeting about Department of Justice criminal cases," told ABC News.

"I'm not going to be bullied or influenced by anybody... whether it's Congress, a newspaper editorial board, or the president.

Now it looks like the fore person in the jury, in the Roger Stone case, had significant bias. Add that to everything else, and this is not looking good for the “Justice” Department. @foxandfriends @FoxNews

"I'm gonna do what I think is right. And you know… I cannot do my job here at the department with a constant background commentary that undercuts me.

And I'm happy to say that, in fact the president has never asked me to do anything in a criminal case."

Mr Barr has been in the firing line since top Justice Department officials intervened in the sentencing of Stone, 67, for lying to Congress, witness tampering and obstruction of justice.

His conviction arose out of the Mueller investigation into Russian interference in the 2016 presidential election.

This is a horrible and very unfair situation. The real crimes were on the other side, as nothing happens to them. Cannot allow this miscarriage of justice! https://t.co/rHPfYX6Vbv

Prosecutors in the case wanted him to serve seven to nine years for a "direct and brazen attack on the rule of law".

But the department told the judge in the case that such a punishment - which was in line with sentencing guidelines - "would not be appropriate."

Mr Trump's response was typically abrasive, tweeting it was "horrible and very unfair" and that "the real crimes were on the other side."

"Cannot allow this miscarriage of justice!" he added.

Questions immediately arose over whether the intervention came at the president's behest, but Mr Barr said he thought seven to nine years was excessive right from the start and that he wondered if it was spin when he heard it.

He claimed he told staff his thoughts that night, before Mr Trump tweeted.

The entire four-man DOJ prosecution team withdrew from the case, and one prosecutor resigned from the department entirely.

Even long-time Trump ally, Senator Lindsey Graham, chair of the Judiciary Committee that oversees the Justice Department, said the president should not have tweeted about an ongoing case.

The Justice Department, while led by a president appointee and Cabinet member, is expected to enforce the law and defend the interests of the US without political influence.