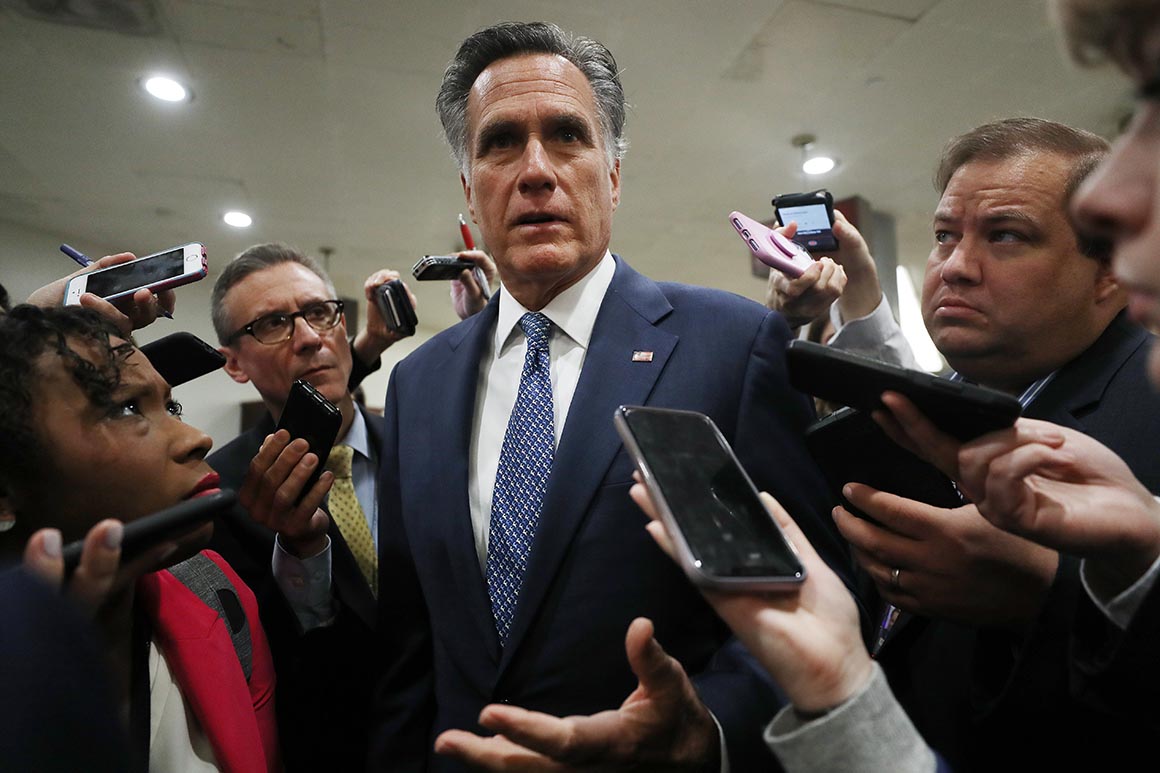 Mitt Romney brought a stunning twist to the end of President Donald Trump’s impeachment trial: A bipartisan vote to convict the president on charges of abuse of power.

The Wednesday announcement by the Utah Republican made him the only member of the GOP to break with the president and his party on the crucial question of whether Trump deserved to be removed from office. The 2012 Republican nominee said he was left with no other options, regardless of the volcanic reaction instantly delivered by some of the president’s supporters.

"The grave question the Constitution tasks senators to answer is whether the president committed an act so extreme and egregious that it rises to the level of a 'high crime and misdemeanor,' Romney said in a dramatic floor speech, in which Romney choked up while discussing how he is guided by his faith.

The move denies Trump the unanimous Republican support he had sought and invited an avalanche of attacks from the president and his allies.

Donald Trump Jr. immediately lit into Romney on Twitter: “He’s now officially a member of the resistance & should be expelled from” the party. His niece, GOP chairwoman Ronna McDaniel, said “this is not the first time I have disagreed with Mitt, and I imagine it will not be the last.”

Senate Majority Leader Mitch McConnell told reporters Wednesday that he was "surprised and disappointed" by Romney's vote but that he saw good GOP teamwork on impeachment. Asked about expelling Romney from the Republican conference, McConnell responded: "Sen. Romney has been largely supportive of everything we've been trying to accomplish."

Romney was already somewhat isolated, having voted with Sen. Susan Collins (R-Maine) to hear from former national security adviser John Bolton in the trial about Trump’s solicitations of foreign interference in the 2020 election and withholding of Ukraine aid. But now, “it’s going to get very lonely” for him in the Republican Party, he acknowledged in a Fox News interview.

Still, the first-term senator explained that going with the party line would simply not be the right thing to do and quoted a hymn to explain his decision-making: “Do what is right, let the consequence follow.”

“I understand it will be substantial and I have to recognize that it was one or the other. One is to say, I don't want to face the blowback,” Romney said. “But on the other side, there is: Do you do what you know is right?”

At least initially, there was shock but little criticism among the other 52 Senate Republicans who will acquit the president. Sen. Roger Wicker (R-Miss.) said simply of Romney: “This is his hour.”

“He made very clear on the witness vote that he could go his own way,” said Senate Majority Whip John Thune (R-S.D.). “He listened to everything and he just came to a different conclusion … we all know he’s a very independent person. And obviously we’re going to continue to work with him. There’s always another day and another vote.”

“Mitt was my friend before he made this decision, and he will be my friend after this," said Sen. Rob Portman (R-Ohio). “We disagreed on this one, but he’s a colleague and a friend."

Despite Trump Jr.’s call to expel Romney, there were no immediate signs that he would face such retribution. Kicking Romney out of the GOP conference would narrow the Republican majority and make confirming the president’s nominees much more difficult.

"I’m glad Mitt’s a Republican," said Sen. Kevin Cramer (R-N.D.). "I’m disappointed that he’s wrong on this vote and I’m grateful that 52 other Republicans disagree with Mitt. But at the end of the day the president is going to be acquitted and that’s the main thing."

Romney had previously expressed his deep dismay with Trump's bid to push Ukraine to investigate his political rivals, and he reiterated his concerns on the floor.

"The president is guilty of an appalling abuse of public trust. What he did was not perfect. No, it was a flagrant assault on our electoral rights, our national security and our fundamental values," Romney said. "Corrupting an election to keep oneself in office is perhaps the most abusive and destructive violation of one's oath of office that I can imagine."

Romney’s relationship with the president, and his party, have become ever more complicated. Romney ripped into Trump during the 2016 campaign, then interviewed for a Cabinet job. By 2019, Romney had entered the Senate as one of Trump’s chief GOP critics, including with an op-ed assailing the president’s character.

After Romney criticized Trump for requesting foreign investigations into former Vice President Joe Biden, a 2020 rival, the president labeled him a “pompous ass.”

Senate Republicans have also occasionally criticized Romney. Just last week Sen. Kelly Loeffler (R-Ga.), who is running in a competitive intraparty contest this fall, said Romney was trying to "appease the left." Sen. David Perdue (R-Ga.) likened Romney to a potential "Jeff Flake on steroids" last year. Perdue happened to be presiding over the Senate when Romney made his speech announcing his vote to convict the president.

The 2012 GOP presidential nominee said he had received numerous calls and texts urging him to "stand with the team" on impeachment. And he noted that he had voted with Trump 80 percent of the time in the Senate.

"I'm sure to hear abuse from the president and his supporters," he said. "Does anyone seriously believe that I would consent to these consequences other than from an inescapable conviction that my oath before God demanded it of me?"

Romney's vote has already secured a place in the history books. He became the only senator to cross party lines in Trump's trial after all Senate Democrats voted to convict and remove the president on Wednesday afternoon. And in the three presidential impeachment trials that have ever taken place, he's now the only senator to vote to remove a president of his own party from office.

Democrats, especially those close to him, were visibly moved by Romney’s decision. Sen. Brian Schatz (D-Hawaii) went into the Senate chamber on a whim at 2 p.m. Wednesday afternoon: “I just had an instinct that this might be a moment.”

“It's the hardest thing to do in the world to stand up to your party and to your friends and to your donors and to just decide to do what's right. We all wonder whether we would make the same decision if we were in the same position,” said Sen. Chris Murphy (D-Conn.), who runs a foreign relations subcommittee with Romney. “There’s still honor left in this place.”

Marianne LeVine and James Arkin contributed to this report.