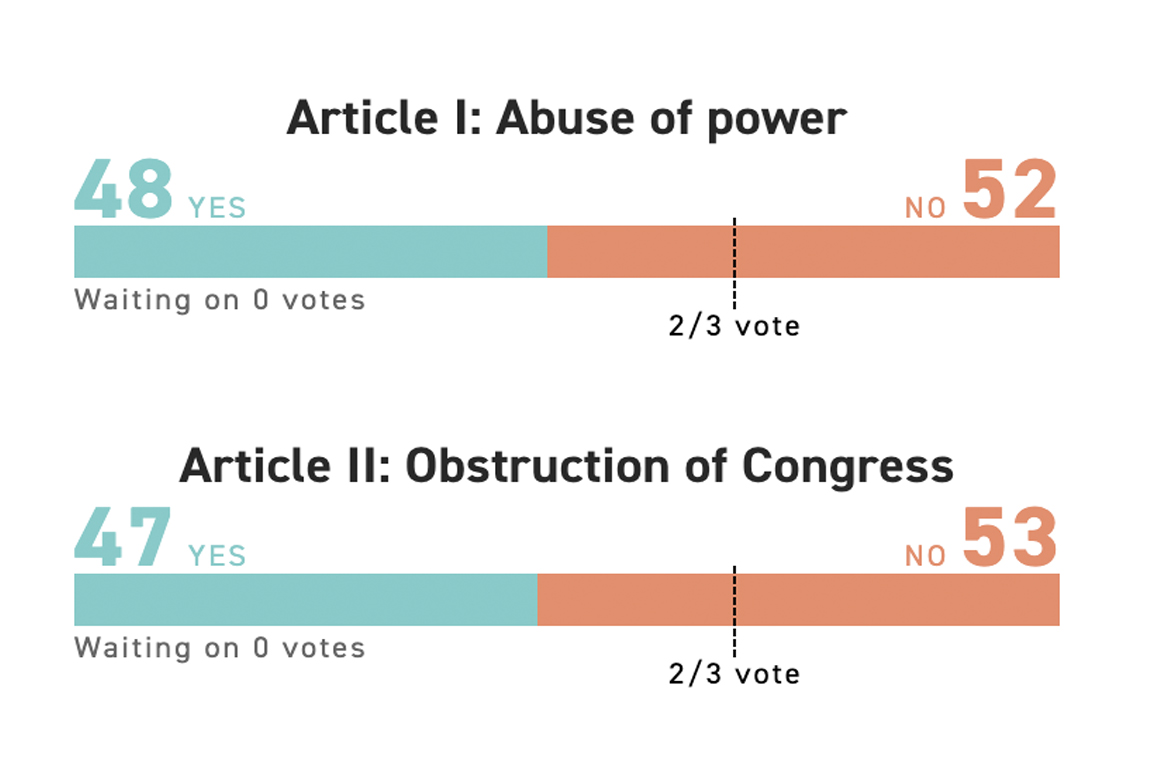 The Senate on Wednesday acquitted President Donald Trump on two articles of impeachment, rejecting the House’s charges that he should be removed from office for abusing his power and obstructing the congressional investigation into his conduct.

The vote capped a frenetic four-month push by House Democrats to investigate and impeach Trump for allegedly withholding U.S. military aid from Ukraine to pressure its leaders to investigate his Democratic rivals, including former Vice President Joe Biden. The impeachment articles also charged Trump with obstructing the House’s investigation into the matter.

The first article, abuse of power, failed 48-52 — well short of the 67-vote super-majority required to remove Trump from office. Utah Sen. Mitt Romney was the lone Republican to vote in favor of the abuse of power charge. The second article, obstruction of Congress, failed 47-53 — a party-line vote. All Democratic senators voted to convict Trump on both counts.

Chief Justice John Roberts, who presided over just the third presidential impeachment trial in U.S. history, announced the result on each article of impeachment Wednesday afternoon, bringing the three-week trial to a close.

“The Senate, having tried Donald Trump, president of the United States, upon two articles of impeachment exhibited against him by the House of Representatives, and two-thirds of the senators present not having found him guilty of the charges contained therein: it is, therefore, ordered and adjudged that the said Donald John Trump be, and he is hereby, acquitted of the charges in said articles,” Roberts said.

The Senate’s verdict was the climax of a three-year existential threat to the Trump presidency that began with former special counsel Robert Mueller's investigation in May 2017 and continued with the House’s Ukraine probe, which began in September. And it comes just days after the first votes were cast in the 2020 presidential campaign.

Trump’s acquittal marked the end of a remarkable chapter of presidential scandal that only accelerated and accentuated Trump’s grip on a Republican Party establishment he once scorned. But it appears likely to bleed into another phase, as House Democrats vow to continue their myriad ongoing probes targeting the president.

Trump immediately celebrated the outcome of the impeachment inquiry — which he has labeled a collective “witch hunt” and “hoax.” Within minutes of his acquittal, Trump tweeted a parody video joking that he would be president forever.

The impeachment saga served primarily to accelerate an already-dysfunctional Congress’ slide into permanent political warfare. Democrats amassed a roster of evidence that Trump withheld military aid from Ukraine, a foreign ally at war with Russia, in order to coerce its government to investigate his political adversaries. But Republicans responded by closing ranks around Trump, attacking the House’s impeachment process as a primary defense and asserting that Democrats did not prove their case and were seeking to overturn the results of the 2016 election.

“We simply cannot let factional fever break our institution,” Senate Majority Leader Mitch McConnell (R-Ky.) warned ahead of the votes. “The institutions must break the fever, rather than the other way around. The founders built the Senate to prevent temporary rage from doing permanent damage to our republic.”

A handful of Senate Republicans — Lamar Alexander of Tennessee, Susan Collins of Maine and Lisa Murkowski of Alaska — argued that the House had largely proven its case and that Trump's actions were wrong, but they ultimately concluded the charges did not merit removing a president and all of the associated national turmoil that would follow.

“The House did little to support its assertion … that the president will remain a threat to national security and the Constitution if allowed to remain in office,” Collins said from the Senate floor.

The acquittal vote came days after a Democrat-led effort to subpoena additional witnesses and documents failed, largely on party lines. Romney and Collins were the only Republicans to join all 47 Democrats to support the motion for new witnesses. When that vote failed on Friday, the result seemed certain — and in the ensuing days, nearly every Republican senator publicly declared their intent to vote in favor of an acquittal.

Trump’s acquittal bookended the Sept. 24 launch of the House’s impeachment investigation by Speaker Nancy Pelosi, which was followed by a breakneck flurry of depositions and public hearings that featured senior State Department, Pentagon and White House officials defying Trump’s orders and testifying on the alleged scheme.

Pelosi delayed the formal transmission of the impeachment articles to the Senate for several weeks while new information about the Ukraine saga continued to pour out. But Republicans, including some who at least professed to be open-minded about the House’s case, argued that Pelosi’s decision to delay sending the articles undercut Democrats’ claims that Trump was an imminent danger to national security who must be removed from office immediately.

House Democrats, who impeached Trump on Dec. 18, always expected the Republican-controlled Senate to acquit the president. So the House’s top impeachment prosecutor, Rep. Adam Schiff, focused his final argument on coaxing a single GOP senator to join them and deny Trump a united front among Republicans.

That push succeeded in dramatic fashion on Wednesday when a choked-up Romney announced his support for the abuse of power charge from the Senate floor, stunning Trump’s allies and his GOP colleagues.

“The president is guilty of an appalling abuse of public trust,” Romney said in explaining his vote. “What the president did was wrong — grievously wrong.”

As Roberts read the final vote tally, it fell upon a starkly silent chamber in a scandal-weary Washington, which has buckled under the constant strain of the Trump era. And unlike the conclusions of Watergate and the 1999 Clinton impeachment trial, the end of Trump’s three-week trial appeared poised to be interpreted as just another political speedbump on the road to a bruising 2020 election season.

The chamber was more crowded on Wednesday than it was on any other day of the trial. A handful of House lawmakers showed up to watch the final proceedings, including Democratic Reps. Sheila Jackson Lee, Mary Gay Scanlon and Peter Welch; as well as GOP Reps. Louie Gohmert, Fred Upton, Steve King and Lee Zeldin. The roll-call vote unfolded like a long-practiced routine, despite the rare nature of the proceedings, with most senators standing up at their desks even before their name was called.

Trump’s eventual acquittal was all but certain. No Republicans voted to impeach him in the House, so it was extremely unlikely that at least 20 GOP senators would vote to convict him. The likelihood of Trump’s acquittal was even cited by several Democrats as an initial reason to not proceed with an impeachment inquiry in the first place.

Yet Pelosi, who hesitated for months to embrace calls for impeachment, said the Ukraine scandal changed her mind — and that the charge that Trump was soliciting foreign interference in the next election required urgency, even if Republicans remained opposed. Public support, once sharply against impeachment, surged during the Ukraine investigation to a 50-50 split on whether Trump should be removed from office.

“The facts are not seriously in dispute,” Senate Minority Leader Chuck Schumer (D-N.Y.) said on the Senate floor. “The president sought to cheat the people out of a free and fair election. How could such an offense not be deemed a high crime?”

“Our nation was founded on the idea of truth,” Schumer continued. “But this president is such a menace, so contemptuous of every virtue, so dishonorable, so dishonest, that you must ignore — indeed sacrifice — the truth to maintain his favor.”

The central allegations against Trump stretch back to July 25, 2019 — the day after Mueller testified to Congress about the Kremlin’s massive interference campaign in support of Trump during the 2016 campaign.

The day after Mueller appeared on Capitol Hill, Trump spoke by phone with the newly elected president of Ukraine, Volodymyr Zelensky, and asked him to investigate former Vice President Joe Biden on corruption charges that sworn witnesses and contemporaneous evidence have largely discredited. Trump also pressed Zelensky to look into a debunked, Kremlin-promoted conspiracy theory that Ukraine — not Russia — hacked a Democratic Party server in 2016 and then absconded with it.

Trump’s request of Zelensky came at the same time his personal lawyer Rudy Giuliani and other associates were mounting a relentless effort to press Ukrainian officials to investigate Biden, as Trump urged his advisers and diplomats to coordinate with Giuliani in their Ukraine efforts.

As part of the alleged scheme, Giuliani helped orchestrate a smear campaign of Marie Yovanovitch, the U.S. ambassador to Ukraine. Giuliani and his associates viewed her as an obstacle to the Biden investigations they were seeking, prompting Trump to recall her to Washington in May 2019.

Throughout the pressure campaign, Trump repeatedly dangled but withheld a White House meeting for Zelensky, which the new leader coveted in order to show a united front with the West against Russian aggression. And in late June, Trump also ordered a hold on $391 million in military aid to Ukraine over the objections of the State Department, Pentagon and National Security Council.

Though the impeachment process has concluded, House Democrats have vowed to continue investigating the president. Several pending court cases, as well as other anticipated developments, could keep House Democrats busy investigating the Ukraine matter further. They are also still pursuing Trump’s tax returns, in addition to evidence related to Mueller’s findings about allegations that Trump obstructed justice.

Trump, too, appears to be indicating he won't be deterred in his Biden push. Giuliani has repeatedly called for a continued focus on the Bidens and said in a recent NPR interview that Trump should investigate the matter once impeachment is behind him. Trump, too, continues to insist that his actions toward Ukraine were “perfect,” undermining claims from some GOP senators that Trump would be chastened by impeachment and learn from the episode.

“If you find that the House has proved its case and still vote to acquit,” Schiff said in his closing pitch this week, “your name will be tied to his with a cord of steel and for all of history.”

Sarah Ferris contributed to this report.