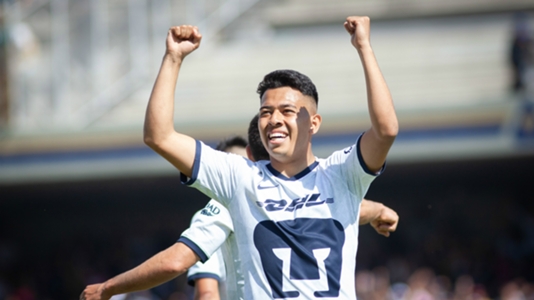 Sebastian Saucedo is hoping to represent the United States in Olympic qualification next month after the opportunity to earn a cap with the senior national team was denied by his club.

The 23-year-old winger started Pumas' match against Santos Laguna on Saturday and played 72 minutes in the 1-1 draw.

The Liga MX contest took place the same day as the United States national team's 1-0 friendly win against Costa Rica, a game for which Saucedo says he was called in for but unable to attend because of the club game.

Saucedo now hopes to be part of Olympic qualification in Guadalajara, with a portion of that tournament taking place in a March FIFA window when Pumas won't have matches.

"The senior team called me in to play Costa Rica, but because of a game here - we traveled to Torreon and the U.S. game against Costa Rica was Saturday, so they didn’t let me go," Saucedo said at a news conference Wednesday.

"For Olympic qualification, there’s the FIFA date. I imagine the club will deal with that when it comes to letting us go or not.

"I’d like to go. It would be a dream to qualify for the Olympics."

Saucedo also feels that his winter move from Real Salt Lake to the Mexico City club has boosted his stock, especially after a strong start in which he scored on debut.

"When I was in Salt Lake, I may not have had as much opportunity to get into the national team and everything but after coming to Pumas, the first games have gone really well for me," Saucedo said.

"The manager of the senior team called me, the (U-23 manager) is always talking to me to see how I am, so it’s something different and something important to be here."

It can't hurt that Pumas have had a fair level of success early in the tournament, sitting third in the table with a pair of victories and a pair of draws.

Saucedo has started each match and said he feels he has earned opportunities from current manager Michel that he may not have been afforded playing in MLS.

"I feel a lot better here. Not only being with better players in the squad than where I was, but also because I’ve been able to fight for my spot here," he said.

"I think there it was sort of a situation where the older player or more experienced player plays, whereas here if you’re doing well in trainings and in games, you’re going to keep being a starter."

Pumas return to action with a home match on Sunday against Atletico San Luis.

Olympic qualification begins March 20 and continues through the April 1 championship match. The winners of the two semifinals qualify for this summer's Olympics in Japan.