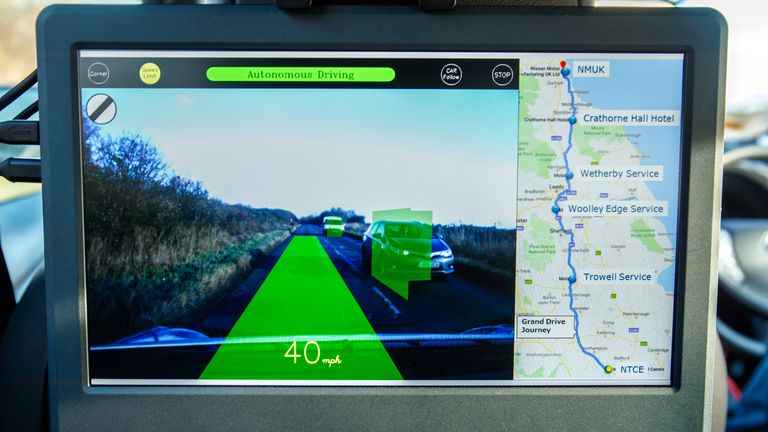 A modified version of the Nissan LEAF has completed the UK's longest autonomous car journey by driving itself the 230 miles from Cranfield in Bedfordshire to Nissan's manufacturing plant in Sunderland.

According to Nissan, the only times a human driver had to take over during the course of the journey was when the car had to drive into motorway services to be charged.

The official mileage for a Nissan LEAF with a 30 kWh battery is 130 miles on a full charge, although it isn't clear how much additional battery running the autonomous computer system required.

According to an image showing the route for the car and the services it had stopped at, the LEAF stopped for four charges during the 230-mile journey.

Without human intervention the autonomous car handled country lanes with "no or minimal road markings" over the course of the journey, as well as junctions, roundabouts and motorways, according to Nissan.

The technology itself handled changing lanes, merging, stopping and starting when necessary.

Even without clear traffic markings, the technology the LEAF is based on is marketed as able to handle "narrow winding roads, carriageways with no lane division markings and poorly-marked roundabouts" all on its own.

The computer system has built a data set of "previously encountered traffic scenarios and solutions" and uses this data to "learn" to handle similar scenarios in the future.

Ironically called the HumanDrive project, the £13.5m partially government-funded road trip took place on public roads "with surrounding motorists none the wiser" according to Nissan - other than the extensive HumanDrive branding on the car itself.

George Freeman, the minister for the future of transport, said: "The UK is fast becoming a leader in intelligent and automated vehicle and traffic management technology, a huge global sector set to create thousands of jobs.

"Our Future of Mobility: Urban Strategy is supporting transport innovation for cleaner, greener and smarter transport, and Nissan's successful HumanDrive project is an exciting example of how the next phase of the UK's transport revolution could look."

Business minister Nadhim Zahawi added: "Safely completing the longest autonomous drive in Britain is an incredible achievement for Nissan and the HumanDrive consortium, and a huge step towards the roll-out of driverless cars on UK streets.

"This project is a shining example of how the automotive industry, working with government, can drive forward technology to benefit people's mobility - while helping to slash carbon emissions."