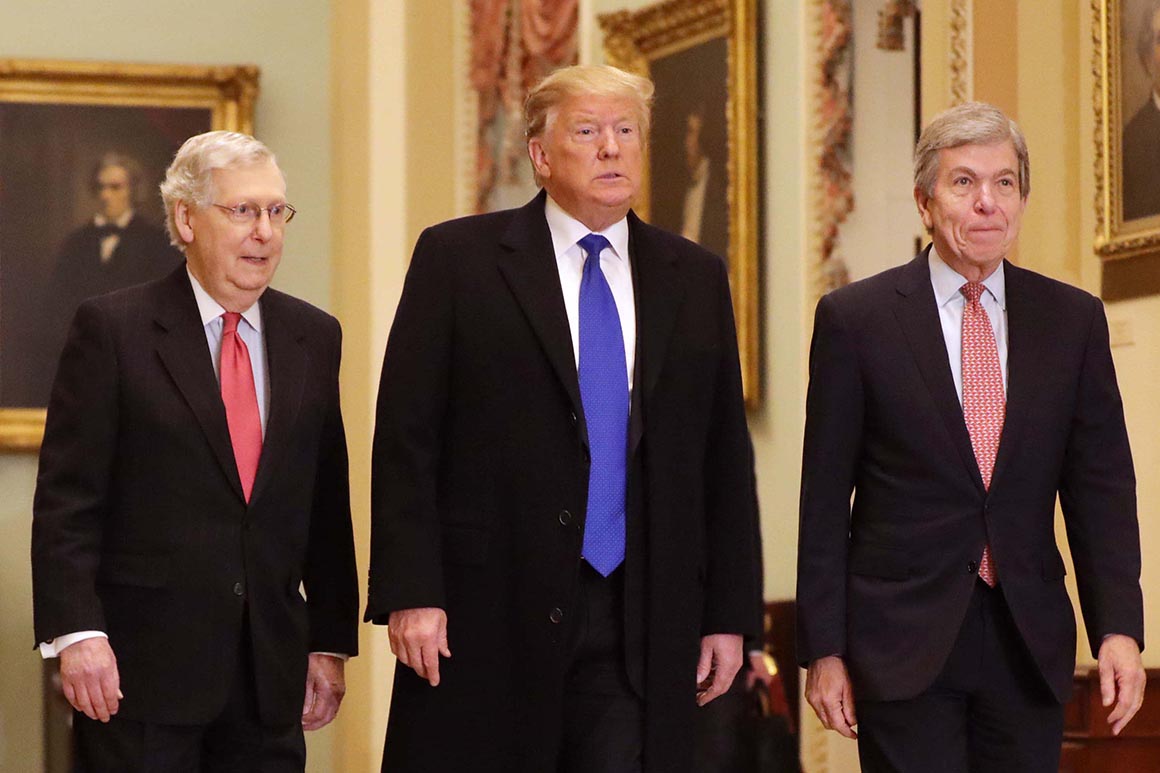 Senate Republicans spent three days listening to the House impeachment managers present a comprehensive case for removing President Donald Trump from office — an elaborate, multimedia narrative laying out a wide array of offenses allegedly committed to benefit the president’s personal political fortunes at the expense of the nation.

Yet few Republicans will publicly admit they’ve heard anything done by Trump that was wrong or unethical or inappropriate at all, let alone impeachable.

A small minority of GOP senators may ultimately end up mildly criticizing the president’s behavior in requesting investigations into Joe Biden and delaying military aid to Ukraine. But any expressions of disapproval are muted, or explained away as an honest mistake by a frustrated president who just wanted to fight corruption in Ukraine.

“I do things every week that are inappropriate. So no, I’m not going to go down that road,” said Sen. Roger Wicker (R-Miss.). “This is a constitutional remedy that was designed for the most extreme of cases and we’re just not anywhere in that [ball] park.”

It’s a reminder of the unyielding grip Trump has on his party and the lack of a middle ground that exists for Republicans when it comes to the president.

Rep. Adam Schiff (D-Calif.) stood on the floor Friday passionately exhorting senators to remove Trump from office, warning them that a president who solicits a foreign government to investigate a political rival would do it to them if they got in Trump’s way. “It shouldn't matter that it was Joe Biden because I'll tell you something, the next time it just may be you,” Schiff warned. “It just may be you.”

However, it is very unlikely that more than one or two Republican senators are even considering a vote to convict Trump and remove him from office, far from the 20 needed to reach the 67-vote threshold required by the Constitution. GOP leaders and aides privately doubt any Republican will cast such a vote, especially after they hear from Trump’s defense team over the next few days, and particularly if a key procedural vote on hearing witnesses is defeated next week.

A small group of Republicans that includes Rob Portman of Ohio, Lamar Alexander of Tennessee, and Pat Toomey of Pennsylvania have said that the president’s behavior was not appropriate yet not impeachable. Sens. Susan Collins (R-Maine) and Mitt Romney (R-Utah) have not tipped their hands and are viewed as possible votes to convict, although not probable.

“It’s a very serious matter and I’m listening in a respectful way,” said Collins, who has already signaled that she may vote for additional witnesses to be called. “I’ve filled up 25 pages of notes on my legal pad and I pay very close attention.”

But for the rest of the party there’s almost no interest in even inching toward a rebuke of Trump. There’s definitely no attempt to censure the president or propose some other formal condemnation short of impeachment. To Republicans, there’s no point trying to concede Trump did anything wrong — a far cry from Democrats’ denunciation of President Bill Clinton’s behavior during his 1999 impeachment trial.

“Our job is not to evaluate in great detail what happened. Our job at this point is to evaluate whether it’s impeachable or not,” said Sen. Roy Blunt (R-Mo.). “And I don’t see minds changing on that, including mine.”

For Trump, party loyalty is paramount and opposing him is deadly in Republican primaries — ask former Rep. Mark Sanford (R-S.C.). Few Republicans won in 2016 after abandoning him, and since then, few have really even tried.

Schiff seemed to acknowledge that dynamic Friday when he cited an anonymous quote reportedly given by a Trump ally to GOP senators: "'Vote against the president and your head will be on a pike.'" The comments, however, appeared to anger GOP senators, with several uttering, "not true" as soon as Schiff said it.

Still, these days the only Senate Republican running for re-election without hugging the president is Collins.

In other swing states, GOP senators have made the calculation that anything resembling a split with the president is a mistake that could encourage a primary challenge or depress the conservative base in a general election.

“The question is, whether or not what they’ve presented — which could basically fit into the first hours of the debates on Tuesday — does it rise to the level of removal? And I say no,” said Sen. Thom Tillis (R-N.C.), who is up for reelection this November. “Are there stylistic differences between maybe the way I’d do it and the president? Possibly. But stylistic differences aren’t enough for me to vote to remove.”

Senate Majority Whip John Thune (R-S.D.), who has occasionally complained about the president’s tweets and incendiary rhetoric, said Trump is never going to be like other presidents and can’t be evaluated the same way his predecessors were.

“As everybody sort of knows, he’s very unconventional,” Thune said of Trump. “And I think a lot of people when they voted for him, that was baked in and they knew what they were getting. That’s why there hasn’t been that huge public reaction to this, except for the partisans on both sides.”

“Sure,” Sen. James Lankford (R-Okla.) said when asked if he had any concerns about the president’s behavior. “There are things that I’m taking notes on, I’m waiting to be able to hear the other side of it.”

Sen. Ron Johnson (R-Wis.), vice chair of the Senate Ukraine Caucus who also serves on the Foreign Relations Committee, urged Trump in late August to release the aid only to be temporarily rebuffed. Johnson has stated Trump denied any link between the aid cutoff and the need for Ukraine to announce an investigation into Joe and Hunter Biden.

“I didn’t agree with the president. I was trying to change his mind. But I also could see the fact that his concerns were legitimate,” Johnson said. “I told him this doesn’t look good politically. It just ties into the whole Russia mantra. But I also freely admit his concerns are legitimate, the corruption” in Ukraine.

Of course, the Democratic impeachment managers pointed out again and again that all the evidence available shows Trump had no interest in Ukrainian corruption and was solely focused on a potential 2020 foe.

And then there are Republicans who portray Trump as a victim or see a “deep state” conspiracy to remove him from office and seize power in Washington.

“The one thing I would say that is sharp and in focus for me is that the bureaucracy is clearly against this guy,” said Sen. Kevin Cramer (R-N.D.). “The rift between the elected branch and the political branch from the bureaucratic branch demonstrates why there’s such a big problem today.”

Heather Caygle contributed to this report.