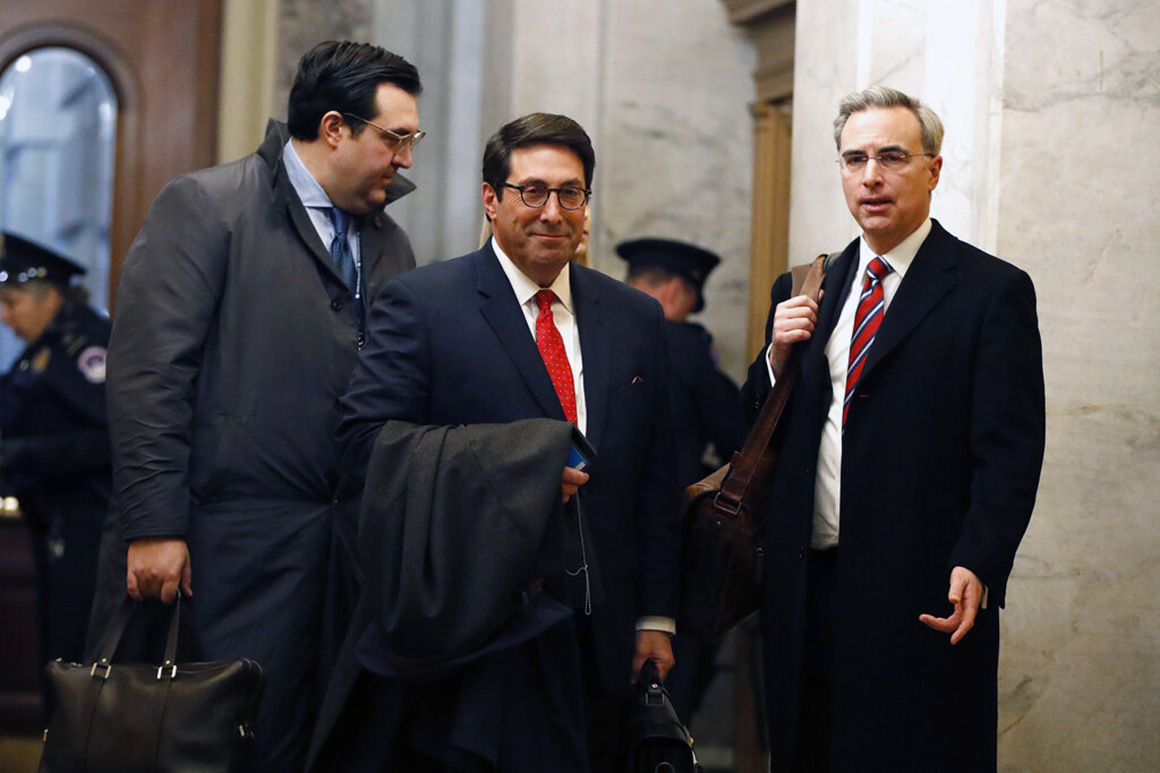 President Donald Trump is the one on trial, but brace yourself Saturday to hear an awful lot about Joe Biden.

After sitting silently on the Senate floor for three full days, White House and personal lawyers to the president plan to turn his impeachment trial into an uninterrupted attack on the former vice president — a frontrunner to be the Democrats’ 2020 nominee.

“Believe me, you'll hear about that issue,” Jay Sekulow, Trump’s longtime personal lawyer, told reporters Friday in the Capitol during brief remarks where he previewed how the president’s legal team planned to use its allotted 24 hours of time to air a long list of familiar Trump grievances, including unsubstantiated charges of corruption against Biden.

It’s not the strategy most lawyers would take when a president’s job is on the line. But this is the Trump era and any norms from past impeachment fights appear to be out the window. More than anything, Trump’s lawyers are aiming to use their nationally-televised platform to stamp out any lingering consideration by a handful of Senate Republicans to join Democrats in demanding new witnesses and documents to aid their prosecution.

Whether that plan works remains to be seen -- a vote on the witness question looms next week and several GOP senators have suggested they’re still open-minded. Trump himself is a wildcard in that debate. He has at times demanded that Republicans call his own favored witnesses, including Biden, and at others has called for a swift rejection of Democrats’ case.

Trump’s Senate trial revolves around an abuse of power charge from the Democrat-controlled House that he pressured his Ukrainian counterpart to investigate Biden and other political adversaries, in part by withholding $391 million dollars in military aid. The House also impeached Trump for obstructing their investigation into the alleged scheme.

Over three days this week, Democrats laid out a voluminous case against the president, and concluded by calling him an ongoing and “imminent threat” to national security who is likely to continually attempt to corrupt the 2020 election to his benefit. The House’s lead prosecutors, Rep. Adam Schiff, described Trump as a willing vessel for Russian propaganda aimed at hurting the U.S.-Ukraine alliance. And Democrats also sought to preemptively counter many of Trump’s anticipated attack lines.

But now it’s Trump’s turn to push back. His attorneys intend to argue extensively — despite voluminous testimony to the contrary — that repeated calls for Ukraine to investigate Biden reflect a genuine concern about corruption rather than a politically motivated attempt to damage a rival.

They also contend that Biden sought the removal of a Ukrainian prosecutor who was investigating Burisma, an energy company where Biden’s son, Hunter, was serving on the board of directors.

Democrats presented extensive evidence during the Senate trial that the Ukrainian prosecutor Biden and the Obama administration helped remove was an impediment to anti-corruption investigations. Rather, witness testimony collected by the House suggested that Trump seemed fixated on pushing a sham investigation into Biden in order to damage the former vice president’s political prospects headed into the 2020 Democratic nomination fight. Democrats also gathered extensive evidence to show that Trump privately professed no interest in anti-corruption efforts in Ukraine and other countries.

The high-profile effort by Trump’s attorneys to delve into the Bidens is in many ways akin to the outcome Democrats sought to head off when they first began their impeachment investigation.

“What they hope to achieve in the Senate trial is what they couldn’t achieve through their scheme,” Schiff said Friday night. “It’s about completing the object of the scheme through other means -- through the means of this trial.”

On Friday, Sekulow said that House prosecutors “opened up the door” for the president’s lawyers to go on offense on Biden since they brought the topic up first — comments that mirror those of Sen. Lindsey Graham (R-S.C.).

“I guess they figured that was their way of getting ahead of it,” Sekulow said.

Trump’s lawyers won’t just dwell on Biden. They also intend to make an extensive case that Democrats’ entire impeachment process must be discarded as invalid. Leaning on outside-the-mainstream constitutional theories, the Trump team has argued that the House's impeachment is “defective” because it didn't charge him with violating a criminal statute. And they dispute that Trump can be booted from office over a charge he rejected congressional subpoenas.

“This idea that you obstruct Congress by exercising ... constitutional privileges is absurd, absolutely absurd,” Sekulow said. “These are fundamentally important rights, the way our separation of powers works, under our form of government.”

But Sekulow downplayed the way the schedule worked out. He explained that the Senate asked Trump’s lawyers to only use about three hours Saturday morning, which means they’ll just be previewing what will be a more substantive presentation starting Monday and potentially spilling into Tuesday.