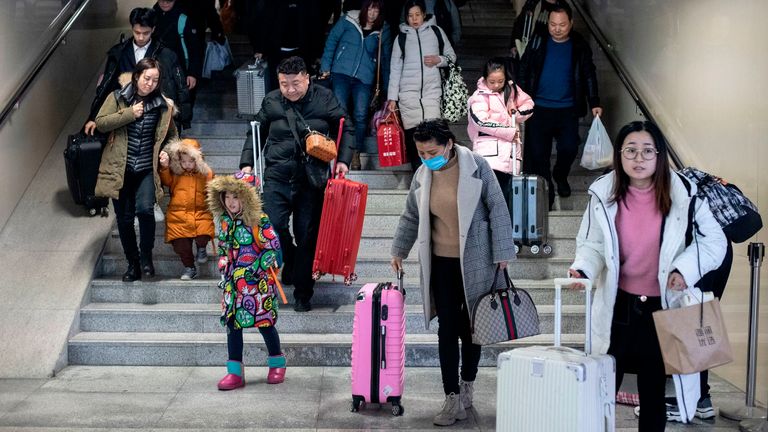 A third person has died in a virus outbreak in China as 139 new cases of the illness were found over the weekend, health officials have said.

The new virus belongs to the same family of coronaviruses that causes Severe Acute Respiratory Syndrome (SARS), which killed nearly 800 people globally during a 2002/03 outbreak that also started in China.

Authorities have warned the coronavirus is spreading to more cities as the country gears up for the lunar new year later this week.

Hundreds of millions of Chinese people are expected to travel domestically and abroad for the celebration.

The cases are the first reported outside the city of Wuhan where the virus originated.

The Wuhan Municipal Health Commission said in a statement that 136 new cases of coronavirus had been discovered in the city on Saturday and Sunday.

As of late Sunday, 198 cases had been reported in Wuhan in total, including three deaths.

Some 170 people were still being treated in hospital while 25 had been cured, the Wuhan Municipal Health Commission said.

The statement gave no further details of the latest death toll.

Two cases have also been reported in Thailand and one in Japan, all involving people from Wuhan or who recently visited the city.

Beijing said on Sunday it will increase efforts to contain the coronavirus outbreak, while health authorities around the world are working to prevent its spread.

The outbreak is believed to originated from a seafood market in Wuhan.

Doctors began seeing symptoms including fever, coughing and breathing difficulties in people who worked at or visited the market late last month.

Health officials said on Sunday there were 62 cases of the illness, but a study from London's Imperial College suggested there could be more than 1,723 cases in Wuhan alone.

It said: "It is likely that the Wuhan outbreak of a novel coronavirus has caused substantially more cases of moderate or severe respiratory illness than currently reported."

Some experts say the new virus may not be as deadly as SARS, but there is still little known about it including its origin and how easily it can be transmitted between humans.