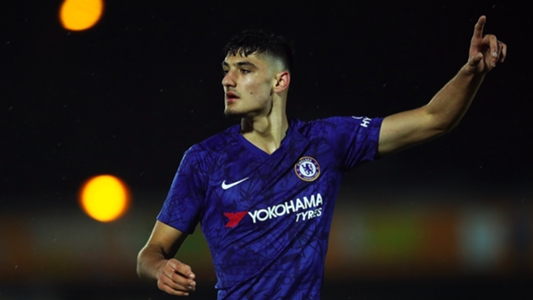 Armando Broja celebrated the extension of his Chelsea contract until 2022 with the match-winning goal against Tottenham in the development squad's first youth match of 2020.

The Albania Under-21 international maintained the Chelsea U-23s' unbeaten record in Premier League 2 with a stunning strike into the roof of the net in the 82nd minute on Tuesday, sealing a 1-0 win for the Blues.

Broja's match-winning contribution comes after meeting up at Stamford Bridge on Saturday to extend his contract, which is good news for the Blues, who have been using the 18-year-old as their main striker at youth level.

Broja has scored 16 goals in 23 matches this season and plays across Chelsea's youth levels from under-18s to the under-23s.

The youngster remains eligible for Albania or England but is currently representing the former, which is the nation of his parents' birth. He joined Chelsea in the under-9s after being spotted in his hometown Slough.

Broja's contract renewal is Chelsea's latest victory in avoiding situations such as talented winger Callum Hudson-Odoi nearly joining Bayern Munich last season with his contract coming to an end in 2021.

Furthermore, the Blues are working on new contracts for Tammy Abraham, Reece James and Tino Anjorin.

Unfortunately, in the case of Abraham, there has been a slow-down in talks after his representatives pointed to his brilliant start to the season to say he is deserving of a similar wage to Hudson-Odoi.

Hudson-Odoi's wage is inflated due to a renewal being agreed in the last 10 months of his contract and with Bayern having been keen to offer similar terms to his new deal - which could see him earn £180,000-a-week if performance-related add-ons are met.