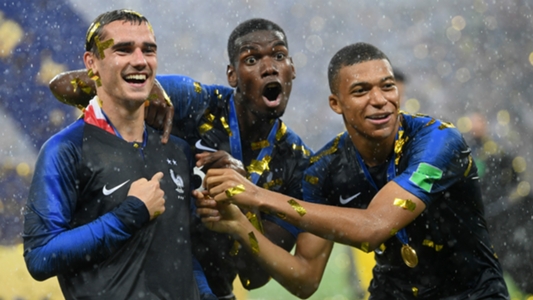 There are not any France players in Liverpool's senior squad because most of them are too expensive, according to their coach Jurgen Klopp.

The European champions have not had a French international on their books since 2017, despite Les Bleus winning the 2018 World Cup and being dominant on the world stage in recent times.

With the likes of Kylian Mbappe, Antoine Griezmann and Paul Pogba all involved in club moves or rumoured transfers over the past few seasons, Klopp revealed this calibre of French player costs too much for Liverpool to buy.

When asked why there was no France stars in his team, Klopp told Canal+: "There is no reason for it.

"Kylian plays for PSG. Griezmann wanted to go to Barcelona obviously - we know how good that team is.

"We would like to have a French player, but some of them are too expensive for us."

Mamadou Sakho was the last France international to pull on the famous red shirt, signing from PSG in 2013 and staying four seasons before departing for Crystal Palace.

The Reds do have a France talent in their under 23's, with 18-year-old left back Yasser Larouci playing in non-competitive matches for Liverpool's first team during pre-season.

Klopp's side has streaked to 10-point lead over Leicester City at the top of the Premier League, while also holding a game in hand on Brendan Rodgers' team, who they face at Anfield on the King Power Stadium on Boxing Day.

Last year's champions Manchester City are a further point back in third position and have struggled to maintain momentum this season after injuries to key stars such as Sergio Aguero, Aymeric Laporte and Leroy Sane.

Liverpool, fresh from winning the Club World Cup against Flamengo in Qatar, have home clashes against Wolves and Sheffield United over the new-year period, before meeting city rivals Everton in the FA Cup third round on January 5.

They will then take on Tottenham, Manchester United and Wolves in a tough stretch of league fixtures through January.