'His face was more shocked than mine!' - Mourinho in hilarious run-in with Burnley boss Dyche 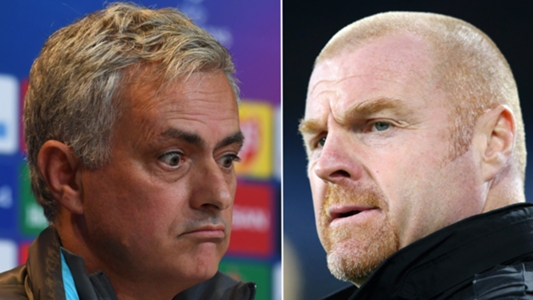 'His face was more shocked than mine!' - Mourinho in hilarious run-in with Burnley boss Dyche

Just a day after handing Burnley a 5-0 defeat in the Premier League, Tottenham manager Jose Mourinho found himself again crossing paths with their manager Sean Dyche.

This time, however, the pair were a long way from the football field and were instead out doing their Sunday shopping.

Mourinho was unsurprisingly the happier of the two after claiming such a comprehensive win and was also the most shocked, even swearing, before quickly apologising due to the presence of Dyche's family.

For the Burnley boss, who opted to stay in London for a day after his side's defeat, the run-in was a pleasant one as he got to know the Spurs manager away from the dugout.

"I’ll tell you a little life story," Dyche said on Thursday. "Strangely, after a bad day for us, a bad result that’s for sure, the next day, with eight–odd million people in London, I bump into Jose Mourinho!

"That was a strange moment for him and me. But we were both correct because he said they were very good, which they were, and I said we weren’t, so we were both right. Anyway, it was just a life moment, that I thought was quite interesting.

"I spoke to him more than I have before, ever. We had a good 10 minutes, and he was very polite, very kind to my family. It was an interesting moment in a city of eight-odd million people.

"I was on my way to Poundstretchers by the way – he was on his way to Harrods!

"His face was actually more shocked than mine, because he was plodding along and I saw him with his hat on, and he shot his head up and said a bad word, and then said, 'Sorry, your wife and children are there!'

Mourinho has enjoyed a mixed start to life back in the Premier League, having won his first three games in charge of Tottenham before losing 2-1 to Manchester United.

His side bounced back against Burnley before again falling to defeat mid-week in the Champions League against Bayern Munich.

Dyche's men meanwhile have fallen to three straight defeats, scoring just one goal in the process, and will be desperate to turn their fortunes around ahead of facing Newcastle in the league on Saturday.