Wolves star Jota makes history with hat-trick as a substitute 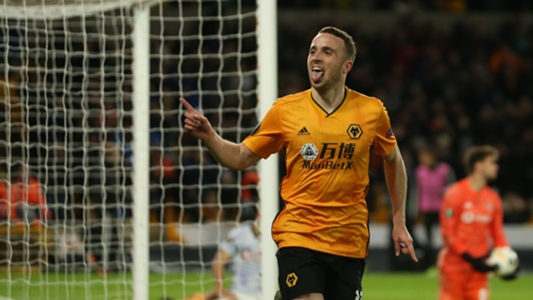 Wolves star Jota makes history with hat-trick as a substitute

Diogo Jota scored a historic second-half hat-trick during Wolves 4-0 thrashing of Besiktas in the Europa League.

The Portugal forward was a 56th-minute substitute for Nuno Espirito Santo’s side at Molineux, scoring the opener 72 seconds after making it onto the field.

He headed home his and Wolves’ second six minutes later before Belgium midfielder Leander Dendoncker made it 3-0.

Jota then completed his hat-trick and made it 4-0 exactly 11 minutes after coming on. It is the fastest hat-trick scored in the Europa League since September 2014, when Claudiu Keseru scored a hat-trick in 10 minutes and 56 seconds for Steaua Bucharest against Aalborg.

The Wolves star is also the first player to score a hat-trick after coming on as a substitute in the Europa League since Steven Gerrard for Liverpool against Napoli in November 2010.

It was also the first treble for Wolves in a major European competition in 48 years. Derek Dougan was the last player to score a hat-trick in the old gold of Wolves against Portuguese outfit Academica de Coimbra in the UEFA Cup in September 1971.

The win was Wolves’ biggest European victory excluding qualifiers since winning 4-0 against Dutch side ADO Den Haag, also in the UEFA Cup, in November 1971.

Despite the thumping victory, it was not enough for the Black Country side to secure top spot in the group, though they have progressed as runners-up.

Portuguese side Braga were losing 2-1 Slovan Bratislava with 20 minutes remaining but turned the game around to triumph 4-2 and go through as Group K winners.

Wolves are unlikely to be too disappointed given the rapid progress the side has made over the past few seasons following the takeover of the club by Chinese investment group Fosun International.

The club lifted the Championship title in 2018 before finishing seventh in their first season back in the Premier League, securing a place in Europe for the first time since 1980.

They are currently sixth in the Premier League table, level on points with fifth-placed Manchester United.

Wolves next face Tottenham in the league on Sunday and are currently on a nine-game undefeated run in all competitions.