‘The new candidate of the young elite’: Buttigieg battles Biden and Bloomberg for the center lane 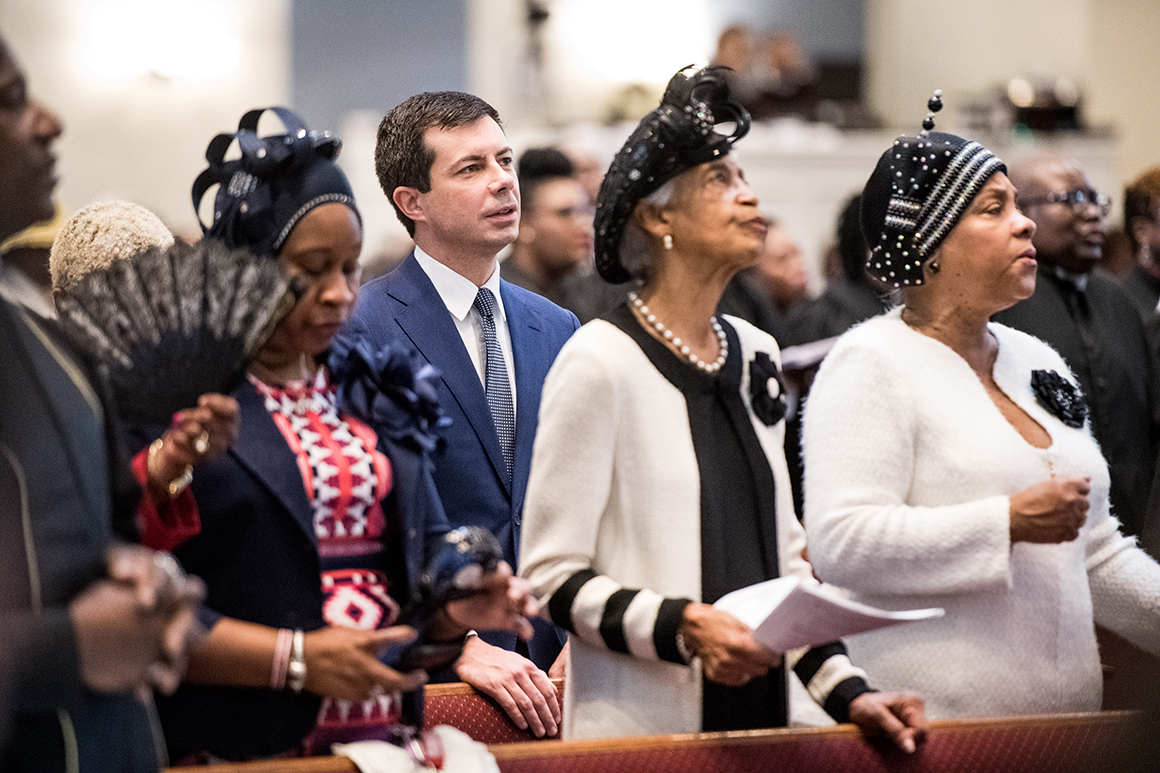 ‘The new candidate of the young elite’: Buttigieg battles Biden and Bloomberg for the center lane

Pete Buttigieg was quickly locking down a solid lane in the Democratic primary: a young, vibrant, gay, Midwestern, war veteran mayor with progressive ideas and plenty of money — but both feet planted in fiscal prudence.

Young Wall Street and tech-entrepreneur types were starting to fall in love — with his poll numbers and fundraising totals underscoring the Buttigieg boomlet. He was the “Parks and Recreation” candidate in the Democratic field and an alternative to 70-somethings Elizabeth Warren and Bernie Sanders, who are both looking to lock down the hyperonline progressive, anti-Wall Street crowd as well as blue-collar workers across the Midwest.

And Buttigieg is a lot younger than former Vice President Joe Biden, who has lagged in fundraising and hardly taken off in the big-donor crowd the way many expected. Buttigieg was poised to perhaps emerge as the leading moderate alternative to Biden.

But then a funny thing happened last week: Another 70-something candidate beloved on Wall Street — billionaire mogul Michael Bloomberg — made an unexpected splash by suggesting he may still enter the race.

Bloomberg will not steal Buttigieg’s momentum with younger, wealthier Democratic voters and donors, people close to the South Bend mayor say. But the former New York mayor does give Big Finance, Big Tech and other more corporate-friendly Democrats another progressive prospect as an alternative to Biden, Sanders and Warren.

“My own feeling is that Bloomberg getting in might — if he stays in — might wind up getting rid of Cory Booker and Kamala Harris and others who haven’t done all that well,” said one of Buttigieg’s biggest New York bundlers. “At the end of this year, I still think it’s going to be Warren and Pete and Biden. And Pete will have plenty of money when it’s time to get into the big spending season and I don’t think Bloomberg will hurt his fundraising at all.”

Indeed, multiple Wall Street executives who like Bloomberg suggested in recent days that they see a very narrow path forward for the former NYC mayor. And that could leave Buttigieg hanging around as not-ultraliberal, not inclined to bust up major industries and not as old or potentially shaky as Biden.

And that leaves some young Democrats who work in tech and finance pretty optimistic.

For this group, a strong distaste for Warren and Sanders — mixed with increasing doubts about the viability of Biden — are creating the kind of opening to gain even more political and financial support that Buttigieg has been hoping for among key donor groups like Wall Street and the tech industry.

“I wasn’t expecting to become a recurrent donor to him before I saw him do a TV interview. I didn’t know who he was or how to say his name or anything else,” said Glenn Rockman, a 38-year-old biotech investor at Adjuvant Capital in Manhattan. “I was shocked by the practical and substantive kind of centrist nature of his commentary and how inspirational I thought he could be. And basically, I hate how far left the primary has gone.”

Rockman said he and his small group of partners even joked about shutting down their office for a few months to campaign and raise money for Buttigieg. It’s a reflection of the Buttigieg-fever running through a contingent of younger, well-heeled Democrats in New York and California.

Buttigieg had three fundraisers in New York last week, two on the Upper West Side and one in midtown, according to invitations obtained by POLITICO, underscoring the campaign's interest in mining the Democratic wealth of New York.

The Buttigieg boomlet in the financial community is enough to seriously annoy die-hard Biden backers on Wall Street who think the only way to stop Warren and Sanders is to double down on the former vice president, who still leads in most national polls despite his dips in some early primary states.

And Buttigieg’s youth, inexperience relative to other Democrats and thin support among the African American community are still giving potential donors pause.

“Look, Pete is definitely the new candidate of the young elite,” said a senior executive and major donor at a big Wall Street bank who backs Biden. “The problem is you can’t win the Democratic nomination without African American support. He doesn’t have any and nobody really knows who he is.”

That sentiment — that Buttigieg is unknown — is not borne out by either his rising poll numbers or his large fundraising numbers. Overall, Buttigieg's campaign has raised over $51 million, according to Federal Election Commission records.

Interviews with nearly a dozen Buttigieg backers in the investment community suggest the South Bend mayor’s mix of progressive stands on social issues and more moderate approaches to taxation, health care and the financial industry more broadly have kicked off a mini-movement among younger investor-types.

“I’ve always been more centrist in my views, socially liberal and more fiscally conservative,” said George Scott, a 48-year old investor and entrepreneur in Sunnyvale, Calif., who has donated $2,500 to Buttigieg so far. “I didn’t really like any of the candidates out there and I saw Pete on a morning talk show a few months back and he was just really smart, and articulate and sharp. He’s a veteran, from the Midwest. He really caught my attention.”

Scott saw Buttigieg speak in San Francisco and was sold. “He won me over. He’s got holistic approaches to issues, and Warren and Bernie are just way too left-leaning on so many issues. And Biden is fading. He’s old and he’s showing it.” Now, Scott is going to donor events and talking to friends about getting behind Buttigieg.

Buttigieg checks many of the boxes Wall Street executives are looking for: He’s more moderate on banking and health care than Warren but not too conservative as to turn off progressive voters. And he speaks the Wall Street language, as a Harvard-educated, former McKinsey consultant whose eyes light up at any chance to get technocratic.

Some Buttigieg bundlers say lately, as Biden’s candidacy has faltered, interest for the mayor has increased. “It started to feel like there was a high probability that Biden could falter and then there would be a big opening in the moderate lane,” said a bundler who hosted an event for Buttigieg over the summer but declined to be identified by name to avoid offending the former vice president or other candidates.

“A lot of the other candidates like Cory Booker and Kamala Harris kind of tried to straddle the moderate and progressive lanes and it just hasn’t worked for them. Mayor Pete took the approach of saying, ‘I’m just going to go with what I believe,’” this bundler said.

It’s a sentiment many Buttigieg backers acknowledge: Mayor Pete winning the Democratic nomination is far from a sure thing. And now they face a new wrinkle with Wall Street-favorite Bloomberg possibly entering the race, occupying the lane of a mayor with extensive experience advocating for progressive policy changes.

Other Wall Street donors and bundlers are still holding back, waiting to see whether Buttigieg can win something, before committing. “There are some people who are impressed with him but they really think he’s the guy in high school with the great future,” said a second Buttigieg Wall Street bundler of his conversations with potential new big donors. “I tell them he’s got a legitimate shot even though it sometimes feels like a crazy thing to tell people.”

Other campaigns are also taking note of Buttigieg’s support from Wall Street and tech donors and using it as a sharp line of attack, arguing that it shows he would lack boldness in reforming big industries and raising taxes on the wealthy to fund big new social programs like “Medicare for All” or the “Green New Deal.”

Buttigieg has supported a “Medicare for all who want it” approach. And he’s made the environment a centerpiece of his generational appeal but stopped short of fully embracing the most far-reaching elements of plans like the Green New Deal. Buttigieg praised the approach in a recent interview with POLITICO but stopped short of backing the enormous tax hikes associated with it. “We’re going to take our time doing our math before you see kind of a detailed tax policy framework from our effort,” he said.

Buttigieg’s ties to Wall Street donors probably won’t translate into the precise policies most financiers want. President Barack Obama, for instance, took plenty of donations from the finance world but still pushed and signed the Dodd-Frank law that so much of Wall Street opposed.

Still, some prominent liberals see the mayor as unacceptably close to the community of Wall Street and banking donors.

“He has more donations from billionaires than any other candidate. There are no surprises here. He made it very clear who he's standing with,” said former Ohio state Sen. Nina Turner, co-chair of Sanders’ presidential campaign. The “corporate types, the oligarchs of this country, know that if Sen. Sanders wins he’s going to do the bidding of the 99 percent and not them.”

In a statement, Buttigieg campaign national press secretary Chris Meagher said Buttigieg has received a range of contributions from both high- and low-dollar donors.

“Pete will do what is right for our country, and is running to move our country forward by leading with bold ideas that the American people can unify around,“ Meagher said. “He is proud to have support from more than 600,000 people who have given everything from a couple of dollars online to the maximum contribution to his campaign. And he will use those resources to beat Donald Trump in November 2020.”

The younger Wall Street donors who are moving toward Buttigieg refuse to apologize for their belief that the Democratic nominee should want to work within the current system rather than trying to blow it up.

“Despite being liberal and leaning left, I’m a die-hard capitalist,” Rockman said. “I’ve worked on Wall Street almost 20 years now and still think with all its flaws it’s still the best path to prosperity. So I’m much more attracted to candidates like [Andrew] Yang and Buttigieg.”