Everybody calls me Rooney now! - Trippier has Costa to thank for nickname at Atletico 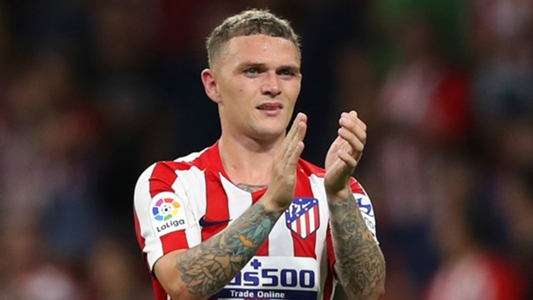 Everybody calls me Rooney now! - Trippier has Costa to thank for nickname at Atletico

Kieran Trippier has admitted that he has found it hard to escape the Wayne Rooney nickname bestowed on him by team-mate Diego Costa at Atletico Madrid but that he is "loving every moment" in the Spanish capital.

The former Tottenham right-back has found his career rejuvenated by a move to La Liga, and has impressed for Diego Simeone's side since his arrival at the start of the current campaign.

His new lease on life has brought him admiration from supporters and seen him reclaim his spot in the England national team, too, after he was dropped for the Nations League earlier this year.

Trippier has, however, revealed that he is better known in some parts by the name of his former international team-mate, after he was originally called so by Atletico striker Costa as a joke.

“It’s just because I’m the only English player here and Rooney’s the only one he’s heard of; it could have been anything," he told the Guardian.

"He just calls me that because it’s the first name that came into his mind. And everywhere I go, they shout Rooney. When I warm up, everyone’s shouting it. Everyone. I have Diego to thank for this. Of all the names."

Trippier, who previously made his name at Burnley before joining Spurs, agrees that his clean break and move away from England has only improved his prospects.

“I’m enjoying my football again,” he added. “I spoke to Fernando [Llorente] and Toby Alderweireld about La Liga and they said I’d really enjoy it so I thought: ‘Grab it with both hands.’

“I heard people saying it was a risk, there were a few warnings, but it didn’t scare me. I thought this was a great opportunity. When I first spoke to my wife it was a bit of a shock.

“The language will take time. I’ve just got to be patient. I just want them to know I’m trying. I couldn’t have asked for a better group.

“The most important thing is I’m enjoying my football. I’ve come to a different league, different surroundings, different culture, everything. Maybe the new challenge has woken me up.

"It was there to see last season that sometimes my concentration was lacking. Sometimes it led to goals, I know that.

"I’ve said many times over the last 16 months my defending needs to improve. People questioned the move but it was the perfect team. If I play for Cholo [Diego Simeone], I know defensively I can improve.”