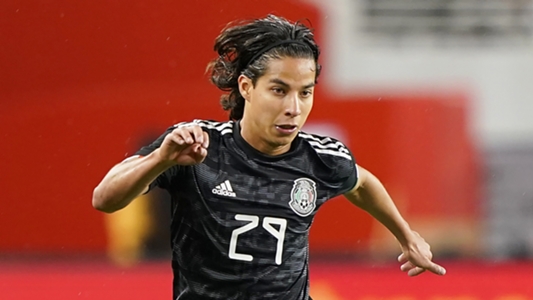 With Diego Lainez unable to find playing time, Real Betis and America are meeting about the possability of a loan return for the 19-year-old, according to TUDN.

The winger will almost certainly be loaned out in the winter, with clubs in Spain, France and the United States also interested - though Marca reports Betis' preference is for the player stay in Europe.

In addition to signing several midfielders (see below), Cruz Azul also is looking to clean out much of its attack, according to El Universal.

As playoff hopes fade, manager Robert Dante Siboldi is looking to part ways with Martin Cauteruccio, Stephen Eustaquio and Elias Hernandez, who may be a Chivas target.

Tena may stay as Chivas boss

While rumors indicate new Chivas sporting director Ricardo Pelaez is looking to bring in Diego Alonso or Matias Almeyda as the club's new manager the most likely candidate for the job is already with the team, according to Marca .

The Guadalajara side's plan at the moment is to stick with current manager Luis Fernando Tena, who has led the team to two wins in the last three games.

Even with the bench apparently settled, Esto   reports Necaxa manager Guillermo Vazquez is a target for Chivas and two other grandes, with America or a return to Pumas also possible for the 52-year-old.

U-17 defender getting interest from abroad

The Umder-17 World Cup always has served as a launching pad for Mexican players and this year's edition is no exception, according to  TUDN .

The television network reports Atlas defender Alejandro Gomez is getting interest from European teams, with clubs in France, Italy and England expressing interest in the left-footed player.

Cruz Azul is looking to shore things up in the middle during this transfer window with La Maquina looking at several options.

One, according to  Fox Deportes ,  is prying Ivan Marcone back from Boca Juniors. That may be complicated, with  W Deportes   saying two other teams have inquired about Marcone and Boca also open to keeping the 29-year-old on board. According to  Record ,  both Tigres and Monterrey also are interested in Marcone, with Rayados manager Antonio Mohamed's connections in Buenos Aires potentially helping the club win the battle for the midfielder who likely will command an $8 million fee.

Another option, according to various reports , is acquiring Peruvian defender-midfielder Carlos Ascues from Orlando City where he'd follow the same path as his national team teammate Yoshi Yotun.

Victor Guzman's future up in the air

The 24-year-old was linked to clubs in Italy and Spain in the summer window, and while Garces said there have been no formal proposals there have been conversations with clubs abroad. Chivas also are in the mix to sign Guzman.

Veracruz will look to sell promising goalkeeper Sebastian Jurado in 2020 with Tigres a top suitor, according to  MedioTiempo .

The 22-year-old could leave in the winter or summer, with the Tiburones Rojos willing to accept a fee in the $6 million range.

Veracruz in risk of removal

Liga MX club owners will meet December 3, with removing Veracruz from the league one of the topics set to be discussed, according to  Fox Deportes.

While on the field the club recently snapped a 41-match winless run that extended a year and two months, things off the field continue to be poor. After players nearly went on strike because of unpaid wages, several are simply leaving the team after getting their back-pay. While the owners let Veracruz back in after the club should've been relegated in the summer, they now may have had enough and could play the Clausura with 18 clubs.

Rafa Puente Jr., former manager of Lobos BUAP and Queretaro, is a candidate for a number of coaching jobs.

He has been contacted by Roberto Nanni, the sporting director of Cerro Porteno, about taking over the Paraguayan club next year, according to  D10 .   ESPN Mexico   reports the 40-year-old is new Chivas director Ricardo Pelaez's second option should Diego Alonso not agree to take over the Rebano Sagrado.

Antuna has interest in Portugal

Mexico national team winger Uriel Antuna has interest from Benfica and Sporting in Portugal, according to  Marca .

The 22-year-old is currently with the LA Galaxy on loan from Manchester City but is agreeing to a new contract with City and wants to return to Europe. Antuna previous was loaned out to Groningen but saw little game time in the Netherlands.

He has also been linked with Chivas and with an LA Galaxy stay.

Mexican ownership group out on Newcastle after meeting

A pair of Mexican businessmen met Newcastle owner Mike Ashley last week in London about purchasing the Premier League club but left unimpressed, according to  The Athletic .

Alejandro Irarragorri, of Grupo Orlegi which owns Santos Laguna and Atlas, reportedly was interested in purchasing the Magpies this summer. He also was in London this month to speak at the annual Leaders conference, but it is unclear if Ashley met with Irarragorri and his partners or a different group.

Jose Juan Macias' camp is set to meet with representatives of several European teams this month including Real Betis, according to Sevilla sports newspaper  Estadio Deportivo .

The Leon forward was observed by scouts from FC Koln during Mexico's friendly against Trinidad and Tobago at the start of the month, according to  Marca Claro ,  with Eintracht Frankfurt, Manchester United, Borussia Dortmund and big clubs in Portugal also mentioned as potential destinations.

Estadio reports Betis' crosstown rival Sevilla also is in the mix to sign the 20-year-old who has three goals for Mexico in three matches.

Two of Liga MX's grandes, America and Cruz Azul, are looking to sign Chilean forward Ignacio Jeraldino from Aduax Italiano, according to  TUDN .

Pachuca, which shares ownership with a Chilean club, though not the one where "Jeraldios" plays, is also interested but the Liga MX clubs will have to fend off interest from teams in Spain and Italy.

Castellanos' future may be in Mexico

New York City's Argentine attacker Valentin Castellanos is on the radar of several Liga MX clubs, according to  The Athletic .

After scoring 11 goals for NYCFC in the regular season, "Taty" is set to play in Juarez and Pachuca with the Argentina Under-22 team against Mexico's side also preparing for the Olympics. An inclusion on the roster for Tokyo would further boost his stock, but even without it the 21-year-old has captured the attention of club directors in Mexico.

Cordova getting looks from abroad

America midfielder Sebastian Cordova is drawing attention from a number of European teams including Benfica, according to  A Bola .

However, if Benfica is going to make Cordova the first Mexican to play at the club since Raul Jimenez, it is said it will have to fight off interest from Sevilla and Manchester United. Cordova has three goals in 11 league matches this season and impressed in Mexico's non-FIFA friendly win against Trinidad and Tobago earlier this month.

Olympique Marseille manager Andre Villas-Boas is looking for defensive help this winter and may have personally contacted Tigres center back Carlos Salcedo, according to  various reports .

With OM's defense hurting, the 26-year-old Mexico international may be an attractive option giving his proven European success with Eintracht Frankfurt and Fiorentina and his versatility in playing center back or either fullback slot. Salcedo's Tigres teammate Andre-Pierre Gignac is an OM legend.

Mexico midfielder Andres Guardado will move to Major League Soccer in 2020, according to TUDN .

While various MLS teams are interested, according to the report, it's the Chicago Fire who would have the first right of refusal. Talks already are underway with Real Betis.