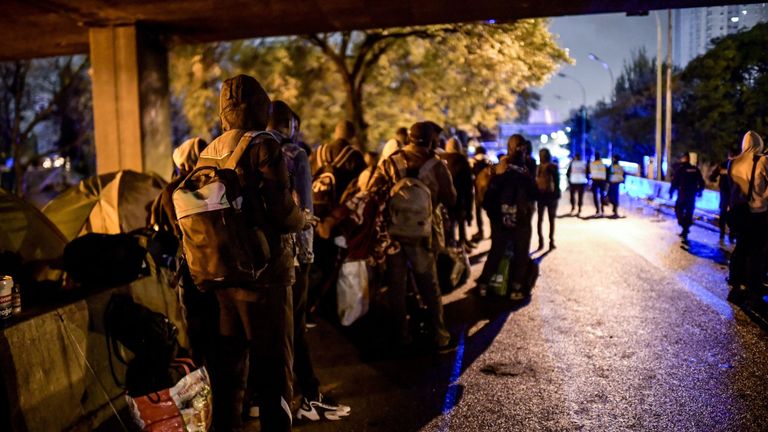 Police have cleared more than 1,600 migrants from below flyovers in Paris - a day after the French government pledged to "take back control" of immigration.

Officers dismantled hundreds of tents and said a police presence would be maintained to stop anyone returning.

Those tempted to go back were warned they would be put into detention centres.

About 600 officers were involved in the operation - the biggest in a year.

The migrants - mostly men from sub-Saharan Africa and some from the Middle East - boarded buses and were taken to gyms and other public venues in and around Paris.

Police Prefect Didier Lallement said that "1,606 people were evacuated and the site is now freed of all its occupants".

In a statement, police added: "People who try to resettle will be immediately checked and their administrative status verified, leading to them being placed in an administrative detention centre if they are staying illegally on national territory."

Paris mayor Anne Hidalgo told reporters: "Prefects have told me time and again the camps would not come back, but each time they have reappeared."

Speaking on Wednesday, French prime minister Edouard Philippe said the country had to "take back control of our migration policy".

New measures include tailoring the number of immigrants according to various professions' requirements.

"We'll set job by job quantifiable goals," Mr Philippe told BFMTV, adding that the aim was to have access to legal immigrants "when France needs it".

The new approach is "coherent and balanced", he said.

The move by Emmanuel Macron's centrist government is being seen as a way of resisting competition from the right during next year's municipal elections, and when France votes for a new president in 2022, when Mr Macron may face off against far-right leader Marine Le Pen.

Ms Le Pen said France had to be made less "attractive" - by ending all free health care for migrants, for example.

Nicolas Dupoint-Aignan, from the far-right Stand Up France party, described the new measures as "limited".