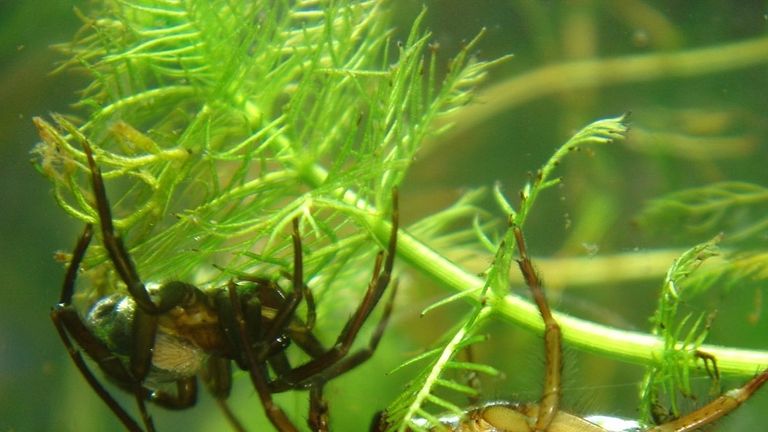 Researchers at the University of Rochester have created an "unsinkable metallic structure" inspired by diving bell spiders and rafts of fire ants.

The structure could lead to an unsinkable ship being created, and wearable flotation devices which would still float even after being punctured, according to the scientists.

Professor Chunlei Guo used a groundbreaking technique his laboratory developed to use extremely short bursts of lasers to "etch" nanoscale patterns on the surface of the metal.

These patterns will then trap air and make the surfaces superhydrophobic - or extremely water repellent.

Although the researchers made the laser etchings on aluminium, they believe that it would work with "literally any metal or other material".

Unfortunately, the researchers discovered that after these metallic structures spent a long time underwater they began to lose their hydrophobic properties as the etchings were worn away.

This is where the diving bell spiders and fire ants came into play.

Both of these animals are able to survive for long periods under and on the surface of water by trapping air within an enclosed area.

Diving bell spiders trap air within a dome-shaped web which they store underwater, and from which they derive their name.

This diving bell is filled with air that they transport down from the surface by carrying it along their superhydrophobic legs and abdomens.

Fire ants are similarly available to protect their entire colony during floods by trapping air between their superhydrophic bodies and creating a floating raft by clinging to each other.

"That was a very interesting inspiration," explained Chunlei Guo, who is a professor of optics and physics at the University of Rochester.

In a new paper published in the journal ACS Applied Materials and Interfaces, Professor Guo's team explains their key insight that multifaceted superhydrophobic (SH) surfaces can trap a large air volume, suggesting that SH surfaces could be used to create buoyant devices.

The structure the team ended up developing treated metallic surfaces on the inside of two parallel aluminium plates.

Because the treatment is applied to the insides of the plates the patterns are protected from usual wear and abrasion which degrades how water-repellent they are.

The distance between these aluminium surfaces has been calculated to create a waterproof compartment that will allow the structure to stay floating.

"Even after being forced to submerge for two months, the structures immediately bounced back to the surface after the load was released," explained Professor Guo.

The University of Rochester said that the structures retained this ability even after being punctured multiple times, because the air remained trapped in the remaining parts of the compartment or adjoining structures.