'27 days of strikes' planned on major rail line next month 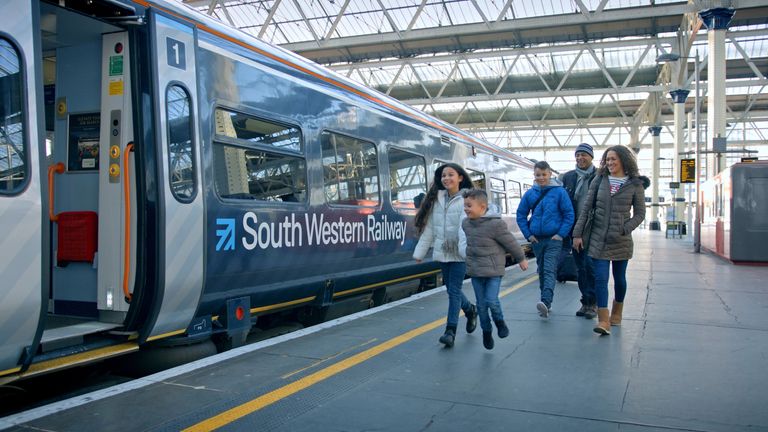 '27 days of strikes' planned on major rail line next month

27 days of strike action will take place on South Western Railway next month, the RMT union has said.

The planned walk outs are due to begin on Monday 2 December as part of a long-running dispute over guards on trains, threatening travel chaos for commuters and Christmas shoppers.

RMT general secretary Mick Cash claims its members had been "left with no choice" - accusing the company of "dangling" a potential breakthrough deal in front of the union and then failing to honour it, for no reason.

He said: "At the last meeting we held with SWR, principles in agreements were made in good faith with the company's negotiating team and we now feel hugely let down again.

In a statement, the union said: "The company's unremitting failure to give assurances that their new operational model won't move to Driver Controlled Operation - with the role of the guard butchered completely - means the union has been left with no alternative but to call further industrial action.

Mick cash added: "I want to congratulate our members on their continued resolve in their fight for safety and the role of the guard on SWR.

"It is wholly down to the management side that the core issue of the safety critical competencies and the role of the guard has not been agreed."

Sky News has approached South Western Railway for a response.

RMT workers are due to go on strike on the following:

News of the industrial action came on the same day rail passengers were warned about engineering work on some of Britain's busiest lines over Christmas.

The majority will be done on Christmas Day and Boxing Day - when most of the rail network is traditionally shut down - but there will also be limited trains from the station during the morning of 27 December.

There are around 25% fewer engineers working during the preiod compared with 2018, meaning more lines and services will operate as normal.

In total, Network Rail is carrying out 386 projects over Christmas.

Its chief executive, Andrew Haines said: "Our passengers want and deserve a more reliable railway and that's why this Christmas we are out working on the track and behind the scenes to help make that happen.

"Significantly fewer people travel over the Christmas holidays, which is why we do so much work at this time of year.

"But we know some of our passengers will have important plans, so please check before you travel. We have plenty of people in our stations in the run up to and over the break who are on hand to help."