‘Slings and arrows’: Impeachment bears down on Susan Collins 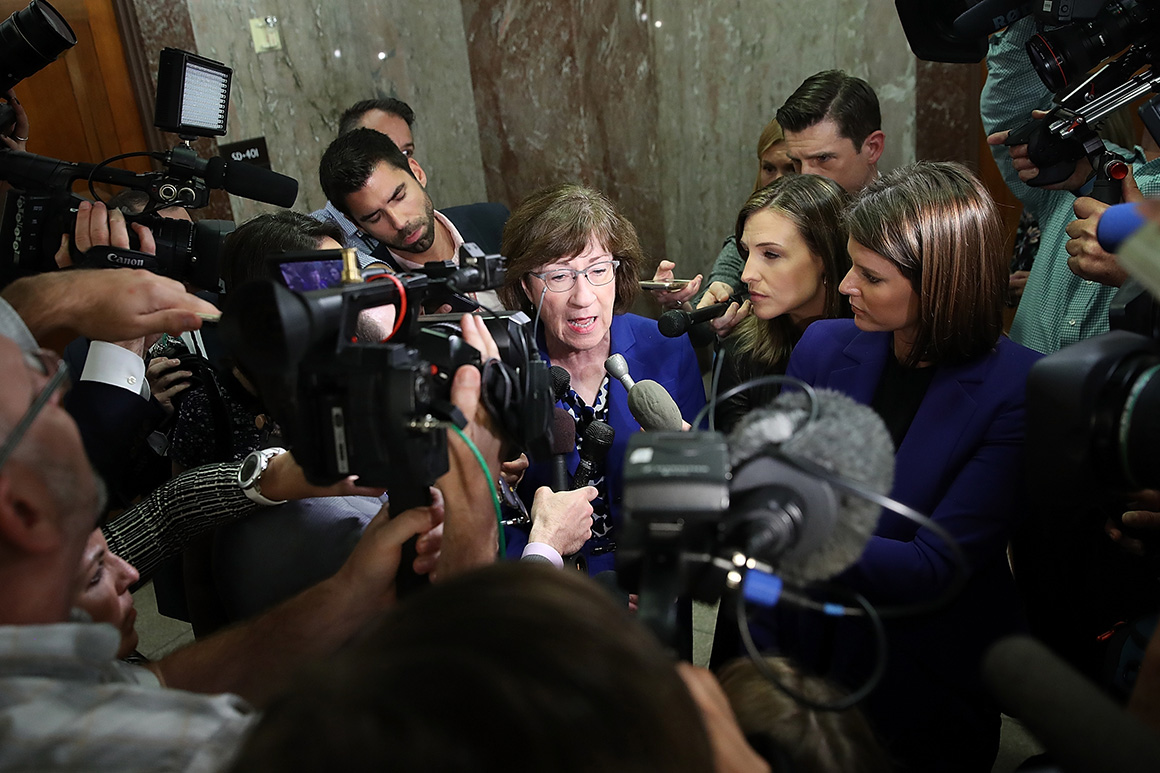 ‘Slings and arrows’: Impeachment bears down on Susan Collins

Shortly after she became one of just five Republican senators to vote to acquit President Bill Clinton on both charges of impeachment, Susan Collins returned to Skowhegan for the state party’s Lincoln Day dinner.

Maine Republicans did not exactly roll out the welcome mat.

“That was not a popular position back home,” Collins recalled of the criticism she received in 1999 after condemning Clinton for his “inexcusable” behavior but declining to convict him. But Collins dodged a Republican primary challenger the next time she was up in 2002 and romped to a general election win.

Twenty years later as she prepares to take Donald Trump’s presidency in her hands, Collins is sure to face an even more volcanic response.

Her reelection contest is already on track to be the state’s most expensive race ever. And Trump is eager to compete for the state’s four Electoral College votes with a campaign aimed at white, working-class voters.

If she votes to acquit the president, the state’s resurgent Democratic Party and its national allies are likely to clobber her as out of step with the state’s light blue hue. And if she votes to remove Trump from office after a Senate trial, she’ll risk dampening support from the conservative base and raising the ire of the president himself.

Still, impeachment also offers an opportunity for Collins to emphasize her independence at a time of deep polarization and a crucial moment in history.

Already she is taking a unique approach among her fellow incumbent Republicans, declining to endorse or disavow Trump’s reelection bid. She sided with her party to confirm Supreme Court Justice Brett Kavanaugh and broke with the GOP on the vote to repeal Obamacare, but impeachment may eclipse even those explosive fights.

So of all the Republican senators up for reelection in 2020, no one has a more wrenching confluence of politics, personal brand and principles to consider than Maine’s senior senator.

“I’ve cast a lot of tough votes in my lifetime. And I have angered both the left and the far right at times. And if you look at my years here, I’ve not deviated from the approach that I’ve taken,” Collins said in an interview. “If you’re the most bipartisan senator, you can be sure that you’re going to take slings and arrows.”

“Susan Collins has faced tough political decisions in the past and she has proven time and time again that no one can bully her."

As the House revs up its impeachment drive, Collins is simply refusing to talk about the Ukraine scandal threatening Trump’s presidency. She’s going to be a juror, she says, and that means she will simply not treat impeachment “as a frivolous or political act.”

She hasn’t spoken to friends who often buck their parties like Democratic Sen. Joe Manchin of West Virginia or Republican Sen. Mitt Romney of Utah about impeachment. Republican leaders and the president are laying off her.

Collins has not joined them explicitly , though she was one of just three Republicans to shun a GOP resolution condemning the House impeachment process.

And the pressure will increase with each step toward the president’s impeachment.

Republicans across the country are eyeing March 16, the state’s filing deadline, and hoping she continues to run unopposed in the GOP primary. After her votes for tax cuts and Kavanaugh, former Gov. Paul LePage, a stalwart conservative, helped ward off a primary challenge to Collins.

“It might be a no-win situation. But the right thing to do is to oppose impeachment,” said Republican Eric Brakey, a former GOP Senate nominee now running against Democratic Rep. Jared Golden. “I don’t think Susan Collins at the end of the day votes” to remove Trump.

Collins says the president and his aides haven’t contacted her about impeachment and are well-advised to continue the radio silence. But already, Trump’s closest allies in the Senate are publicly advocating that Collins stick with Trump.

“She can be mad at him all day long. I just can’t imagine that at the end of the day she’s ultimately going to vote for [conviction],” said Sen. David Perdue (R-Ga.).

While the even-keeled Collins rarely shows anger, she’s certainly the Senate Republican whose recent voting record is least friendly to the president these days.

Collins has supported Trump on a third of major votes in Congress this year, according to 538’s key vote tallies, a metric that doesn’t even include her opposition to some of the president’s nominees. She voted twice with Democrats on preserving Obama-era regulations on health care and carbon emissions and was the only GOP senator running for reelection to oppose Trump's national emergency declaration on the border.

“Her record is so long and extensive in voting her conscience that that’s why people elect her, not because they necessarily agree with every position,” Romney said. “People don’t necessarily like every vote, but they say ‘yeah, she’s an independent mind, she doesn’t blindly follow what the party leaders say.’”

“If you analyze it purely from politics you would think [the impeachment vote] would be hard,” said Sen. Marco Rubio (R-Fla.). “But I know her well enough to tell you that’s not how she [sees it].”

But especially as Trump prepares to campaign in Maine next year, the president’s us-versus-them mentality could turn Collins’ race into a referendum on her support for the president. The Trump campaign declined comment for this story.

Collins is widely considered by Democratic and Republican senators alike as one of the most unpredictable votes on impeachment. The "Need to Impeach" campaign is running ads to pressure her to put “party over country,” a tactic she abhors.

So GOP leaders in Washington and Maine are taking a hands-off approach, acutely aware of Collins’ sensitive political situation and her penchant for going her own way.

“Susan Collins has faced tough political decisions in the past and she has proven time and time again that no one can bully her,” said Jason Savage, executive director of the Maine GOP. “These intimidation tactics don't work."

“We know that she’s going to do what she thinks is right. And we get that,” said Sen. John Thune of South Dakota, the Republican whip. “Her state’s very different than a lot of the members in our conference and she gets, for that reason, a lot of independence.”

As the House moved to impeach Clinton two decades ago, Collins was not shy about commenting on the “tawdry, embarrassing and needless episode” of his affair with Monica Lewinsky and subsequent attempt at a cover-up, according to an Associated Press story from the time.

And in recent weeks, Collins has been quick to criticize Trump’s “appalling” call for China to investigate former Vice President Joe Biden. She’s stood up for the anonymous whistleblower who's come under attack by Trump and panned the “terribly unwise decision by the president to abandon our Kurdish allies” in Syria.

“I have tried hard not to comment on the allegations involving Ukraine, because that appears to be the focus of the impeachment inquiry,” she said.

Asked whether she’s ever had to bite her tongue amid the flood of press queries, Collins chuckled but then struck a sober tone.

“I really take the role really seriously. There are few powers that Congress has that are more awesome than of being a vote to impeach and convict a president,” Collins said. “It’s too important for there to be a political calculation.”