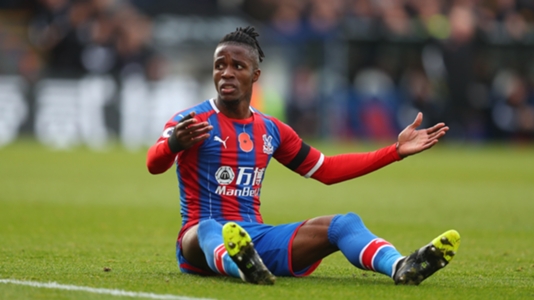 Wilfried Zaha’s strong scoring run against Leicester City in the Premier League has ended after Crystal Palace’s 2-0 defeat on Sunday.

The Eagles' failure to score at Selhurst Park meant the Ivorian forward could not net for the fourth consecutive top-flight game against the Foxes.

Zaha had scored in each of his last three matches against Leicester, netting a total of four, making the East Midlands outfit the opponent he has found the back of the net against the most.

10: Zaha does well to release Ayew on the counter but the striker can't get the right connection on his effort.

It was rather Caglar Soyuncu and Jamie Vardy who had the final say on the day.

Zaha – who had a failed move away from South London in the summer - has not scored in 11 league games this season, having started 10 times and averaging 84 minutes per game.

51: A positive start to the second-half, with chances in quick succession for Ayew and Zaha.

The most impressive stat for the former Manchester United man is his average of 4.5 successful dribbles per game (68%), which is the highest of any player in the Premier League.

While Jordan Ayew has been doing the goalscoring for Palace, Zaha will hope he can find his first goal of the campaign when the Eagles take on Chelsea at Stamford Bridge on November 9.