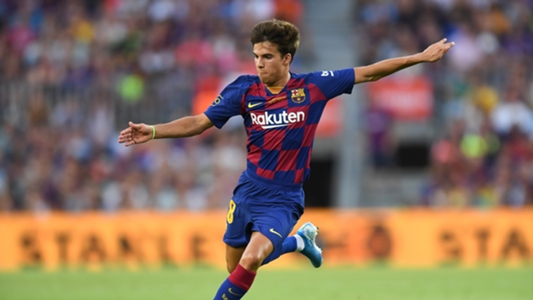 Riqui Puig says that he will be forced to consider his Barcelona future if he isn’t afforded more playing time at Camp Nou soon.

The 20-year-old hasn’t featured for the club in La Liga this season having briefly broken into the first team during the last campaign.

Instead he is still turning out for the club’s B team in the Segunda Division B, and no longer trains regularly with the first team as he did 12 months ago.

And now he says that he “hasn’t closed the door” on the possibility of leaving the La Liga champions if the situation doesn’t improve before then.

"The Second B is a category that is passing through, players don’t want to be here for many years, because we aspire to play at a higher level," he told a press conference.

Asked if he plans to leave Camp Nou in January, he said: "No, theoretically no. But we'll see. I don't close the door, but it's true that I would like to have more minutes.

“If I don't have any minutes, I will have to make a decision. I'm not training so much with the first team this season, whereas last year I was practically in the first team set-up, training with them and going down to play with the B team.

“But this is football and you have to play with your feet on the ground. I have to take the minutes and experience I get and I'm lucky that in the B side I play almost always.”

The 20-year-old joined Barca’s youth set-up in 2013 from Jabac Terrassa, finally making his senior debut in the B team in 2018 during a game against Tarragona.

He looked to be being primed to make the step into Ernesto Valverde’s first team last season but his progress has since stalled, leading to the current impasse and uncertainty regarding his next move.

“It's hard, because last year I was in the first team set-up and this year I am not participating so much," he said. "It's football and I have to assimilate.”

Barca currently lead the La Liga table on goal difference but are level on point with Real Madrid and Real Sociedad. Just one point separates the division's top five teams but Barcelona and Los Blancos do have one game in hand following the delay of El Clasico.