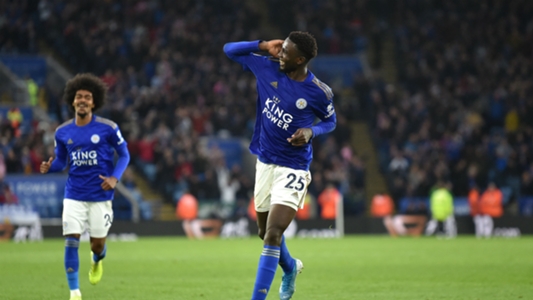 Wilfred Ndidi scored for the second time this season, as Leicester City moved to third place on the Premier League table, after recording a massive 5-0 win over Christian Atsu’s Newcastle United at King Power Stadium.

Ricardo Pereira gave the hosts the lead in the 16th minute of the tie and it remained that way heading into the break. The big moment though, came two minutes before the half-time whistle, after Isaac Hayden received a straight red card for a reckless challenge on Dennis Praet.

It proved to be advantage Leicester from here, as the East Midlands outfit emerged stronger in the second half with a Jamie Vardy’s brace and a Paul Dummett own goal extending the lead. Ndidi would go on to put the icing on the cake in the 90th minute, connecting with Ben Chilwell’s cross and volleying the ball home in fine fashion.

It was Leicester’s fourth league win of the season from seven games, accumulating 14 points, seven behind leaders Liverpool and two behind second-placed Manchester City.

Ndidi put in a Man of the Match performance, making a total of 61 passes, with an accuracy of 91.8% the highest among the Foxes midfielders. He also made five interceptions which was the most of any player on the field.

For Atsu, it’s now four defeats in seven top-flight games for Newcastle, with just a solitary win. The Ghanaian produced only one shot which was off target, making 24 passes with an accuracy of 79.2%.

Leicester move back in to third after a dominant display#LEINEW pic.twitter.com/fbxzvpFvks

His has now played 470 competitive minutes for Steve Bruce’s team this season.

Leicester face Liverpool next at Anfield on October 5, while Newcastle have another tough challenge when they host Manchester United at St. James’ Park a day later.