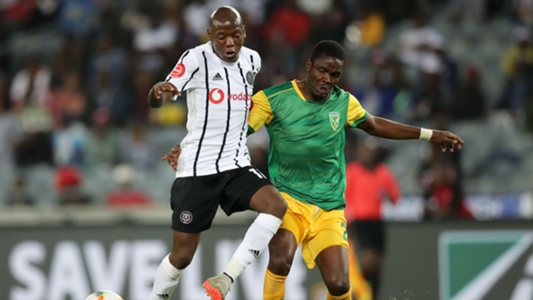 Orlando Pirates' scoring woes continued as they were held to a 0-0 stalemate by Lamontville Golden Arrows in Soweto on Wednesday night.

Rulani Mokwena made wholesale changes as six players, who started against Zambian side Green Eagles on Saturday kept their places in the starting line-up.

Ntsikelelo Nyauza made his first appearance of the season as the Buccaneers looked to snap their five-match winless run across all competitions.

On the other hand, Steve Komphela made only one change to the team which faced Chippa United over the weekend.

Pirates dominated possession from the start, but the hosts found it difficult to unlock the Arrows defence and test goalkeeper Edmore Sibanda.

The visitors grew into the match and they came close to scoring when Sibusiso Sibisi headed over the crossbar with only Bucs keeper Wayne Sandilands to beat with the home side's defence exposed.

Sibanda was finally tested by Frank Mhango from a set-piece and the Zimbabwe international made a comfortable save at the near-post.

Both teams created chances with the half-time break approaching as Knox Mutizwa forced Sandilands into a save from a set-piece, before Pirates defender Innocent Maela hit the crossbar with a header.

The score was 0-0 at half-time with the two teams having failed to take their chances.

Reigning PSL Footballer of the Season Thembinkosi Lorch was introduced by Mokwena after the restart as the hosts pushed for the opening goal.

Pirates mounted pressure on the Arrows backline which defended very well to thwart the Soweto giants - protecting their shot-stopper Sibanda.

However, the visitors looked dangerous on the counter and Sibiya's goal-bound effort was brilliantly finger-tipped over the crossbar by former Mamelodi Sundowns keeper Sandilands.

Newly crowned Zambian Footballer of the Year Austin Muwowo was handed his PSL debut by Mokwena as Pirates looked to snatch a late winning goal.

The left-footed attacker had a chance to be the hero for the hosts, but his free-kick was well-saved by Sibanda, who ensured the match ended in a 0-0 stalemate on the night.

The draw saw Pirates slip down to 10th spot on the league standings, while Arrows climbed up to sixth place on the table.